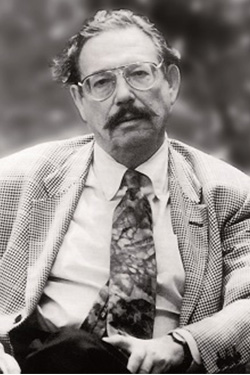 André Volkonsky was born in Geneva on 14 February 1933, a scion of an ancient Russian aristocratic family. He was already beginning to improvise music at the age of five. Sergei Rakhmaninov, whose daughter was married to a member of the Volkonsky family, once listened to the pieces which he wrote as a child. André Volkonsky studied the piano in Geneva and Paris. His teachers included Dinu Lipatti. In 1947 the family returned to the Soviet Union.

From 1950-54 Volkonsky studied with Shaporin at the Tchaikovsky Conservatory in Moscow. In the midst of the stifling political atmosphere, which was the result of the government’s attempt to crush all manifestations of “formalism,” a trend which had begun as early as 1948, André Volkonsky kept swimming against the tide and worked for no one but himself, as it were. From the 1950s onwards a number of works helped to propel the youthful Volkonsky into the foremost ranks of the world of contemporary music. They include the two cantatas written in 1952, Rus (based on a text by Gogol, it pits ancient Russia against jazz rhythms that were then frowned upon in ideological terms) and Le Visage du Monde (Paul Eluard), and the Concerto for Orchestra (1955). In 1957 Volkonsky composed Musica stricta, four innovative piano pieces which make use of serial techniques (the work was first performed by the legendary pianist Maria Yudina and is dedicated to her). With this composition and various other works Volkonsky initiated a new epoch in the history of contemporary Russian music.

Despite the dead hand of ideologically motivated repression, Russia slowly began to play a part in the leading artistic movements of the 20th century. This is exemplified by Volkonsky’s Suite de los espejos (1959), Laments of Shchaza (1960), Sérénade pour un insecte (1959), and Concert itinérant (196467). Gifted composers such as E. Denisov, A. Schnittke, S.Gubaidulina, V. Silvestrov and others followed suit. However, the audacity of Volkonsky the innovator did not escape the attention of the Soviet cultural bureaucrats, and from 1962 onwards they placed a total ban on his music in the Soviet Union. Volkonsky found it impossible to adopt a dual Soviet persona, and thus, as a man of many talents, he decided to pursue a different path, and became a performing musician.

He initiated a new trend in Russia, and gave performances of early music in order to demonstrate that he had an awareness of history. In 1964 he founded Madrigal, an early music ensemble which continues to enjoy an excellent reputation in Russia to this day. In 1973 the government policy of repression and prohibition prompted Volkonsky to emigrate. In the last decades he lived in Aix-en-Provence in the south of France where he died in September 2008. The works composed after 1973 include Immobile (1977), Psalm 148 (1985), and Was noch lebt... (That which is still alive...) (1989).