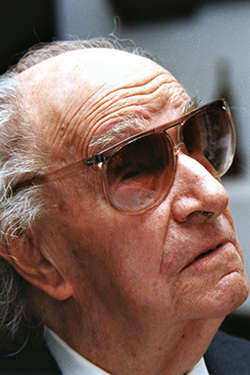 Spanish dance, Spanish poetry, the forms of older Spanish composers all found their place in Rodrigo’s output. And, for all the popularity of the Concierto de Aranjuez, the best of that output is still unknown… (The Independent by Martin Anderson)

Joaquín Rodrigo was born in Sagunto in the province of Valencia on 22 November 1901. Rodrigo’s almost complete blindness at the age of three and initial violin and piano lessons encouraged the development of his special relationship with music at an early age. Following studies in harmony and composition with Francisco Antich in Valencia (1917 to 1922), Rodrigo went to Paris in 1927 to study composition and orchestration with Paul Dukas at the École Normale de Musique for five years. He gained entry to the musical circles surrounding Maurice Ravel, Arthur Honegger and Manuel de Falla and established a reputation as pianist and conductor. After a brief stay in Madrid (1933/34), he returned to Paris in 1935 and took courses in music history with Maurice Emmanuel at the Conservatoire and with André Pirro at the Sorbonne in musicology. At the outbreak of the Spanish Civil War, Rodrigo and his wife, the Turkish pianist Victoria Kamhi, were forced to leave France. The couple returned to Spain in 1939 via Germany, Switzerland and Austria. Rodrigo gained his international reputation following the premiere of the Concierto de Aranjuez in Barcelona in 1940. Alongside his compositional activity and concert tours as a pianist, Rodrigo was also head of the music department at Radio Nacional de España, music critic for leading Spanish newspapers and executive director for the artistic section of the Spanish National Organisation for the Blind (ONCE). In 1947, he occupied the Manuel-de-Falla Chair at the Universidad Central de Madrid. Rodrigo died in Madrid on 6 July 1999.

The Concierto de Aranjuez for guitar and orchestra, composed in 1939, is one of the most frequently performed works of the 20th century. Rodrigo was encouraged to compose the concerto by the guitarist Regino Sainz de la Maza and the work received its first performance with the Philharmonic Orchestra Barcelona directed by César Mendoza Lasalle. In this composition, Rodrigo succeeded in exemplary fashion in fusing traditions of the Spanish guitar – naturally including the flamenco – with an extensive Impressionist tonal palette and Neo-Classical forms. Although the work does not contain specific musical onomatopoeia, the intense atmosphere is highly evocative of the Baroque palace gardens in Aranjuez with their scent of magnolias, birdsong and splashing fountains.

Rodrigo’s early works display influences of Impressionist harmonies, the rhythmic structures of Stravinsky and de Falla and the polytonal techniques of Le Groupe des Six which included Honneger and Milhaud. From the 1940s onwards, the composer increasingly found his way towards a personal style which owed substantial influences to the composer’s study of Spanish Renaissance and Baroque music.

In addition to a large number of instrumental, choral and vocal works including the Sonada de adiós (“Homage to Paul Dukas”, 1935), the Ausencias de Dulcinea for bass, 4 sopranos and orchestra (based on a text by Cervantes, 1948) and the Dos danzas españolas for orchestra (1969), Rodrigo also composed numerous lieder, sacred works and music for ballets and films. The Concierto de Aranjuez is only one of a total of eleven concertos for a variety of solo instruments including guitar, violin, piano, harp and violoncello. The Concierto andaluz, composed by Rodrigo 1967 as a commission by the guitar quartet Los Romeros, is scored for four guitar soloists.

Rodrigo was awarded the Spanish Premio Nacional de Música for his Concierto heroico in 1942 and again in 1982 for his complete works. The composer was a member of the Real Academia de Bellas Artes de San Fernando (from 1950) and the Belgian Académie Royale des Sciences, des Lettres et des Beaux-Arts (from 1978). In 1992, Rodrigo was raised to the nobility by the Spanish monarch Juan Carlos with the receipt of the honorary title Marqués de los jardines de Aranjuez. He is holder of the Cruz de Alfonso X el Sabio (1953), the Cran Cruz del Mérito Civil (1966) and the Premio Príncipe de Asturias de las Artes (1996). Rodrigo was honorary doctor of numerous universities and received the French award Commandeur des Arts et des Lettres in 1998.