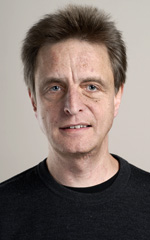 Frank Sikora (*1956) was born in London and drifted into Jazz when he was 15, playing in numerous swing, bebop and gypsy groups while still in school.
Frank initially studied biochemistry (sciences being his other major area of interest), but then succumbed to his first love, venturing into a career as a musician. After completing his studies at the Berklee College of Music and New England Conservatory in Boston/USA, majoring in composition, arranging and guitar, Frank spent more than 15 years on the road, performing amongst others with Art Farmer, Dieter Ilg, Victor Bailey, Joe Haider, Slide Hampton, Pony Poindexter, among others. He then focussed on composing and arranging for a wide variety of professional ensembles (big band, vocal groups, orchestra, radio bands, etc.), acting as musical director for a number of projects (e.g. the „Zurich Jazz Orchestra“ 2003–07).
Frank eventually launched into teaching as his primary calling, running more than 400 workshops worldwide over the past 30 years (improvisation, theory, Ensembles etc.). He taught ear training and arranging at the State University of Music and the Performing Arts Stuttgart/Germany (1987–2007). Since 1988 he has been in charge of the theory department and the master program in 'Jazz Composition & Arrangement' at the University of the Arts Bern/Switzerland, teaching harmony, counterpoint, composition, arranging, ensembles, etc. with a distinct hands-on approach, helping students recognise their creative potential.

Frank currently lives in Switzerland with his wife Regula and his son Loris.