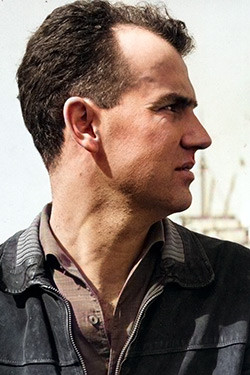 Luigi Nono was born in Venice on 29 January 1924. From 1941 he took composition lessons with Gian Francesco Malipiero, which focussed on works of the 16th and 17th centuries and on the music of the Second Viennese School which was prohibited in Fascist Italy. In 1942, at the request of his family, Nono began to study law in Padua and graduated in 1946. That same year he met Bruno Maderna who gave him free composition lessons. Studying the Franco-Flemish School of composers awakened a fascination with polyphonic canon techniques. In 1948 he met the conductor Hermann Scherchen whom Nono accompanied on tour. His connection with Scherchen led to his exploration of the  German music tradition; joint analyses of the works by Webern and Schoenberg increased his admiration for both composers.


In 1950 Nono first attended the Darmstadt Summer Courses for New Music which saw the world première of his Variazioni canoniche sulla serie dell’op. 41 di Schoenberg. By using the twelve-note series from Schoenberg’s anti-Fascist Ode to Napoleon Op. 41, Nono, a member of the Italian Communist Party since 1952, referred to its political statement. At the Hamburg performance of Schoenberg’s opera Moses und Aron he met Schoenberg’s daughter Nuria whom he married a year later. Dedicated to her is Liebeslied for mixed choir and instruments which was first performed in London in 1956. His work Incontri per 24 strumenti, premiered in Darmstadt in 1955, is characterized by the use of a complex mirror form and a twelve-note series in which the intervals diverge in a zigzag. After this work, large expressive interval leaps became a typical feature of Nono’s melodies. Possibly his best-known work, Il canto sospeso for soprano, alto and tenor solo, mixed choir and orchestra, was premiered in Cologne in 1956. In this work, Nono set farewell letters from Resistance fighter condemned to death.  He intended to musicalize the texts by breaking the language up into syllables, thus making its musical content ready for composition.


In the following years, he worked as a teacher on the Darmstadt Summer Courses, and from 1960 taught in Poland, the USSR, CSSR and GDR. Omaggio a Emilio Vedova, his first electronic composition, was also written at this time. Electronic sounds play an important role in his opera Intolleranza 1960 composed in 1960/61. This piece extends the concept of Gesamtkunstwerk [total artwork, or fusion of the arts] to the contrapuntal combination of scenery, visual projections, music (including tape and loudspeaker) and space.


Despite the advanced tonal language of Intolleranza, the political message of the opera was directed not only to the bourgeois audience. To Nono, it was important that his works were adopted by all social classes: in 1962 he organized the first of many discussion concerts which featured his music.  Held in Italian factories, the concerts attracted up to 5,000 visitors. To make sure that his works were understood by the Italian workers, Nono also used sounds and noises for his electronic compositions which he had recorded in factories.


His next compositions had their roots in the themes from the Holocaust, but he soon felt that the combination of political agitprop and the avantgarde idiom to be an artistic dead end and his style moved on to explore subtle sound nuances, inspired by the piano technique of his friend, the pianist Maurizio Pollini, to whom he had dedicated several works from this creative period. The exploration of the individual sound became the centre of throught during this creative period, so much so that the compositions often move on the edge of audiblity; literary and musical quotations from various sources, ranging from Hoelderlin to Verdi, form isolated tonal islands which are the result of the greatest possible concentration of the innumerable sources of inspiration. Even his most mature works follow this concept so that they lack an explicit story; one might speak of an ’invisible theatre’, the ideas of which are musicalized and which, in itself, takes place only inside the listener himself.


The motif of wandering runs like a thread through his late works: First and foremost is the exploration of the sound and the process of its generation. The wandering of the sound through space, (for example by arranging loudspeaker around a room) opens the listener up to  constantly new perspectives on what can be heard. Closely connected with the aspect of wandering, is the search for constantly new sounds and perspectives of perception, the search becoming the essential goal of composing while following the aesthetic principle of constant change. Nono regarded his native and home town Venice as a symbol of such aesthetics of change. Until his death he admired its wealth of colour, the constant merging of architecture and acoustic impressions such as the ringing of bells. In contrast to the strict serialism of Karlheinz Stockhausen, he achieved the combination of great subjectivity and rigid architectonics even in his late works. In 1990 Nono received the Berlin Arts Prize for Music. He died on 8 May of the same year.