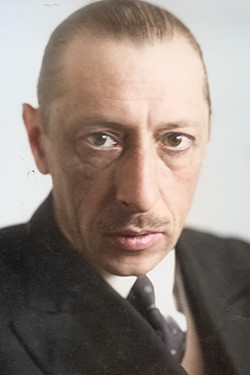 The first requirement for good art remains first and foremost good workmanship. On doit posséder l'objet [One must have a command of one’s professional material]. Only inaccuracy is suspect. (Igor Stravinsky)

Igor Stravinsky was born on 17 June 1882 in Oranienbaum (now Lomonossov) near St. Petersburg. He grew up in a musical family: his father, Fjodor Stravinsky, was one of the most outstanding opera singers in Tsarist Russia. Alongside a humanist education, Stravinsky received tuition in piano, harmony and composition and soon displayed significant talent for improvisation. He subsequently studied law until 1905, but continued his musical studies at the same time. Nikolai Rimsky-Korsakov was his composition teacher from 1905 to 1908. With his composition Feu d’artifice (1908), Stravinsky made an impression on the Director of the Ballets Russes, Sergei Diaghilev, who engaged him to carry out orchestrations and later commissioned him to compose music for The Firebird in 1909. From 1910 to 1914, Stravinsky lived and composed alternately on his estate Ustilug (Volhynia in the Ukraine) and in Clarens (Switzerland). During this period, Le Sacre du Printemps (1913) was composed and unleashed a theatrical scandal at its first performance in Paris. It was principally the seemingly “barbaric” rhythms which were regarded as being shocking and revolutionary to an equal degree. With the outbreak of the First World War in 1914, Stravinsky returned permanently to Switzerland where he remained up to the year 1920. He subsequently relocated to France where he maintained lively contact with the leading artists in Paris (Claude Debussy, Maurice Ravel, Eric Satie, Pablo Picasso, André Gide and Jean Cocteau). He became a French citizen in 1934. As early as 1935/36, he published his memoirs ("Chroniques de ma vie“) and embarked on an active career as conductor and pianist. At the beginning of the Second World War, Stravinsky gave his much quoted series of lectures at the American Harvard University "Poétique musicale" (published in 1942) and thereby avoided the time of the French Occupation. He took up permanent residence in the USA in 1939 and acquired American citizenship six years later. He participated in the Donaueschingen Music Festival for the first time in 1957 where he conducted the concert performance of his ballet Agon. He developed an interest in serial music and its younger representatives Pierre Boulez and Karlheinz Stockhausen. Following his rehabilitation in the Post-Stalinist USSR, he was once again able to visit his native country. Igor Stravinsky died on 6 April 1971 in New York.

The Paris premiere of L’oiseau de feu on 25 June 1910 was a sensational success for the young and ambitious composer and Stravinsky advanced to become a composer of ballet music par excellence. He gained a worldwide reputation with works such as Pas de deux (1921), Jeu de cartes (1936), Scènes de Ballet (1938) and the subsequent concert suite arrangements of these compositions. Stravinsky’s music is characterised by its brief-structured melodies, often only consisting of a few notes, its typical asymmetrical rhythm and its close relationship with dance. The aesthetic impulse comprises a neo-classical sense of form and a decisive anti-romanticism in opposition to the “unending” melodies of Wagner. In contrast to the earlier ballets, the works composed up to 1920 in Switzerland display a completely different style. In the stage work L’histoire du soldat (1918), created in collaboration with the poet Charles Ferdinand Ramuz, Stravinsky reduces the musical mediums and forms to an aesthetic minimum, incorporating elements of jazz in certain passages. The works composed in America include Symphony in C (1940), Danses concertantes (1941-42), Scherzo à la Russe (1944) and Symphony in three Movements (1945). These orchestral works display Stravinsky at the pinnacle of his neo-classical creative phase. Historical models are transformed with the aid of fragmentation and alienation to produce highly innovative tonal concepts. Stravinsky also experimented with serial techniques in his works composed post-1950.

Stravinsky received numerous prizes: he was the first recipient of the Léonie-Sonning Music Prize in 1959 and was awarded the Wihuri-Sibelius Prize in 1963. The same year, his US-American exile homeland conferred him the honour of a star in the Hollywood Walk of Fame. He received an honorary doctorate from the Rutgers University in New Jersey in 1967. In 1983, the “Strawinski Fountain” was inaugurated on the “Place Igor Strawinski” in close vicinity to the Centre Pompidou in Paris. The 16 sculptures of the fountain represent different works by the composer.

1882
Born in Oranienbaum (now Lomonosov) near St. Petersburg
1901
Began to study law in St. Petersburg
1902-08
Private lessons with Nikolaj Rimskij-Korsakov in instrumentation and analysis
1905
Received a diploma in law
1909
Following the World premiere of "Feu d'artifice", acquantance with Sergey Diaghilev and beginning of a friendshop and the long-term collaboration with the Ballets Russes
1910
World premiere of the ballet "L'Oiseau de feu" in Paris by the Ballets Russes
1913
The World premiere of  "Le sacre du printemps" in Paris caused a great scandal.
1914
Moved to Clarens, Switzerland
1918
First compositional exploration of jazz music
1920
Moved to France. Beginning of his "neo-classical" creative period.
Pablo Picasso designed the costumes and stage set for the ballet "Pulcinella".
1924
Debut as a pianist with his own piano concerto
1925
First concert tour of the United States
1926
Beginning of the collaboration with Jean Cocteau
1931
Collaboration with the violinist Samuel Dushkin for the "Concerto en ré" which developed into a longstanding friendship
1934
Acquired French citizenship
1939-40
Lecture series "Poétique musicale" at the Harvard University, Boston
1944
World première of "Scherzo à la Russe" on American radio (Blue Network)
1945
Acquired American citizenship
1948
First encounter with Robert Craft, his later assistant and friend
from 1950
Testing of serial composition techniques
1951
First post-war European tour
World premiere of the opera "The Rake's Progress" in Venice
1959
Received the first Danish "Léonie Sonning Music Award".
Concert tours to East Asia and Europa
1960
Honoured with a star on the "Walk of Fame" in Hollywood
1961
First visit to his native country of Russia since his emigration
1963
"Wihuri Sibelius Prize" for outstanding composers
1967
Honorary doctorate of Rutgers University, New Jersey
1971
Died in New York on 6 April
1987
Posthumous "Grammy Award" for lifetime achievement