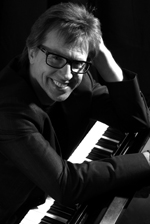 Hans-Günter Heumann (*1955) first studied at the Hanover Musikhochschule (piano with Hans Priegnitz and Konrad Meister, composition with Einar Steen-Noekleberg, as well as music education and musicology) and then later studied composition in New York and New Orleans. As a piano teacher and composer, he has primarily focused on the publication of educational piano literature. His principal concern was to teach music in a comprehensible way and make it accessible to a large audience.

He has composed and arranged piano music in all musical genres for beginners through to advanced musicians; developed piano methods for students of all ages; and published books and sheet music editions which serve to introduce certain composers and their works using text and pictures. The large number of internationally successful publications from Schott Music reflects the approval and popularity  of his work.

Drawing from his many years teaching children, young people and adults, in 1995-96 he wrote two of the most important German piano methods which were extremely well received by adult re-learners, piano teachers and pupils alike.
His Classical Piano Method as well as the multi-media piano method for children, Piano Junior, have become established publications in the English-speaking market. His best-selling German-language edition Klavierspielen – mein schönstes Hobby is also used with great success in French piano lessons under the title À vous de jouer! PIANO. His Piano Kids method and the German version of Piano Junior are also very popular in German-language lessons.

In addition to his educational piano literature, the 'Heumann programme' Easy Piano Music includes very easy arrangements of jazz, rock, pop, and folk music, as well as 'composer themed editions' with easy arrangements and original works of easy to medium difficulty. They are suitable for young and adult beginners as well as for advanced players and music lovers. These include, for example, the Get to Know Composers and Get to Know Classical Masterpieces series. Containing background information and details about the composers' lives and a list of their most important works, including contemporary colour illustrations, they provide easy access to the respective composer and whet the musician's appetite to expand their piano playing repertoire. The volume Piano Classics - The most beautiful piano pieces from Bach to Satie - contains a special selection of works for lovers of piano music.

In 2011 he published Live Your Dream, a book with his own compositions which were inspired by spiritual aphorisms. He also composed pop melodies for beginner's lessons which are included in editions like Fantasy Piano, Mystery Piano or Piano Playground.

Hans-Günter Heumann now works as a freelance composer and author and lives in South Germany.
www.heumannpiano.de