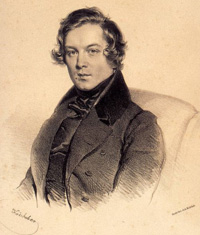 Life:
Schumann, who was also a highly gifted writer, had his first piano lessons at an early age; in 1828/29 he studied law in Leipzig and Heidelberg, but soon devoted himself entirely to the music. In addition to his piano lessons with Friedrich Wieck (*1785, 1873) and studies of theory, he pursued his own studies on the basis of Bach's "Well-Tempered Clavier" which were later taken up and intensified in the BACH Fugues Op. 60 (1845). A pulled tendon in one of his fingers put an end to his career as a virtuoso pianist. At the same time, he wrote his first compositions, until 1839 almost exclusively for the piano. In 1834 Schumann founded the "Neue Zeitschrift für Musik" in which the invented "Davidsbündler" (most notably Eusebius and Florestan as personifications of two sides of his own personality) fought for a new true and poetic concept of music, for true productive criticism as well as against artistic Philistines and light salon music.

In 1840 Schumann married Wieck's daughter Clara against her father's wishes and in the same year composed about 150 songs for voice and pianoforte. In 1841 he wrote, often almost in no time, a number of major chamber music works and in 1842, sometimes similarly quickly and eruptively, two symphonies and other music for the orchestra, including the first movement of the Piano Concerto in A minor Op. 54. In 1843 Schumann came to the newly founded Conservatoire in Leipzig through Mendelssohn Bartholdy, a close friend of his; in 1844 he went to Dresden as choral director. In 1850 he became municipal musical director in Düsseldorf, where Brahms visited him in 1853, but after some time he faced humiliation and intrigues. An emotional disorder (depression, delusion), the first symptoms of which had already appeared at an early age, fully manifested itself in 1854. After a suicide attempt (when he threw himself into the river Rhine) he was committed to an asylum where he remained until his death.

Oeuvre:
In terms of musical history, Schumann's oeuvre is in the middle of German High Romanticism. His poetic and fantastic virtuoso piano oeuvre was created right after Beethoven's and Schubert's deaths, transforming ideas of Jean Paul and of literary Romanticism (e.g. of E.T.A. Hoffmann) into music. He used Beethoven's motivic work for the most differentiated moods and further developed Schubert's bold harmony and songlike melody into a complex pianistic sound. In some works, he expanded the sonata form in an imaginative way, but for the most part avoided it by arranging short character pieces into cycles. The headings of his works prompt associations but are not to be taken in the sense of concrete extra-musical contents.
In Schumann's songs, the piano part stands out independently and characteristically, entirely inspired by the poet's words. Apart from many others, poems by Goethe and especially Heinrich Heine and Joseph von Eichendorff are interpreted adequately here. Schumann's chamber music with piano captivates with the pile of great ideas as well as the constant desire for a dense stylistic form. His string quartets tend toward post-classical intimate lyricism. Schumann's critical analysis of Beethoven's example is most noticeable in his symphonies. Nonetheless, Schumann's four symphonies are prominent examples of the genre, each with characteristic thematic and formal structures. In the fields of opera (»Genoveva«) and oratorio (»Paradise and the Peri«) Schumann created independent works which, unjustly, are performed very rarely. A wealth of forms and of shades of Romantic expressions can be found in his choral music as well.
Until 1842, almost every work by Schumann was brilliant and highly successful. Later, less original, classically Biedermeier-like compositions alternate with highly important ones. Schumann's style and attitude decisively influenced Brahms with regard to history, Hugo Wolf in particular with regard to the lied, and the whole further development in the late 19th century with regard to piano music. His oeuvre marked the beginning of the separation between a rather traditional compositional style (Schumann, Mendelssohn Bartholdy, Brahms) and a progressive style (New German School) some representatives of which (e.g. Liszt), however, were known and greatly valued by Schumann who, with his Romantic complex personality and his awareness of the difficulty to harmonize poetically universal aspiration with his late position in history, represents a new modern type of artist. His writings, testimony to a typically Romantic double talent, are lasting examples of productive music criticism and selfless recognition even of unfamiliar, different creative concepts.
Works:
Piano music: Papillons Op.2 (182932); Davidsbündlertänze Op.6 (1837); Carnaval Op.9 (1834/35); Sonata No. 1 in F sharp minor Op.11 (183335); Fantasy Pieces Op.12 (1837); Symphonic Studies Op.13 (183437); Scenes from Childhood Op.15 (1838); Kreisleriana Op.16 (1838); Sonata No. 2 in G minor Op.22 (183338); Album for the Youth Op.68 (1848).
Orchestral works: 4 symphonies, No. 1 in B flat major Op.38 (1841, »Spring Symphony«), No. 2 in C major (1845/46), No. 3 in E flat major Op.97 (1850, »Rhenish Symphony«), No. 4 in D minor Op.120 (1851, 1st version 1841); overtures, from the music of Lord Byron's dramatic poem »Manfred« Op.115 (1848/49) among others; Piano Concerto in A minor Op.54 (184145); Cello Concerto in A minor Op.129 (1850).
Chamber music: 3 string quartets in A minor, F major, A major Op.41, 13 (1842); Piano Quintet in E flat major Op.44 (1842); Piano Quartet in E flat major Op.47 (1842); 3 piano trios, 3 violin sonatas.
Vocal works: Opera »Genoveva« Op.81 (184749); secular oratorio »Paradise and the Peri« Op.50 (184143); choral music with and without accompaniment; more than 300 songs for voice and pianoforte, including the cycles »Myrthen« Op.25 (1840, various poets), »Liederkreis« Op.39 (1840, Eichendorff); »Frauenliebe und -leben« Op.42 (1840, Adelbert von Chamisso), »Dichterliebe« Op.48 (1840, Heine).