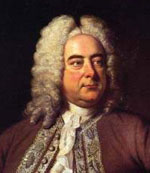 Georg Friedrich Handel, German composer, son of a barber-surgeon from Saxe-Weissenfels, later Kurbrandenburg; one of the most important German and European composers of the Baroque age.

Life and Work:
In Halle (Saale) Handel was a pupil of the organist Friedrich Wilhelm Zachow (*1663, 1712) and received his first post as an organist at the Cathedral and castle church in 1702. In 1703 he became a violinist and soon after 'maestro al cembalo' at the Hamburg Opera directed by Reinhard Keiser. From there, Handel took an educational trip with his advisor Johann Mattheson to Lübeck to visit Dietrich Buxtehude, the most famous organist of his time. In 1705 he wrote his first opera 'Almira' which was followed by another three by 1706. From 1707-1709 Handel travelled through Italy, was temporarily in the employ of Marquis Francesco Maria Ruspoli in Rome and composed mainly secular and sacred cantatas as well as operas and oratorios ('La resurrezione', 1708). Handel made the acquaintance of Arcangelo Corelli, Alessandro and Domenico Scarlatti as well as of Agostino Steffani. In Venice he performed his heroic-comic opera 'Agrippina' at the end of 1709. In 1710 he became the successor of Steffani, Kapellmeister of the elector of Hanover, and went to London where the performance of his opera 'Rinaldo' (1711) at the Queen's Opera (in the Haymarket) was a great success. In autumn 1712 he settled permanently in England (English naturalization in 1727) and only returned to the continent for brief visits. From 1713 the queen bestowed upon Handel an annual pension.

During his first years in London he not only created operas but also composed 'Utrecht Te Deum and Jubilate' to mark the Peace of Utrecht (performed at the Saint Paul's Cathedral) and 'Ode for the birthday of Queen Anne' (both in 1713) as well as 'Water Music' (1717) on the occasion of courtly celebrations on the river Thames (after the accession of George I to the throne). From 1717 he also composed numerous works in the employ of the Duke of Chandos, including suites for harpsichord, anthems and the pastorale 'Acis and Galatea' (1718). In 1719 he was appointed artistic director of the Royal Academy of Music (Royal Opera House in the Haymarket) for which he wrote 14 Italian operas between 1720 and 1728, among them 'Radamisto' (1720), 'Giulio Cesare in Egitto' (1724; 'Julius Cesar in Egypt'), 'Tamerlano' (1724), 'Rodelinda' (1725), 'Scipione' (1726), and 'Admeto' (1727). These works established Handel's fame throughout Europe.

In London, however, Handel's fight for the grand opera failed due to a bourgeois movement aimed against the Italian opera seria as opera of the nobility. The countermovement culminated in the successful performance of the 'Beggar's opera' (1728) by John Gay and John Christopher Pepusch which caricatured Handel's kind of Italian opera with biting social criticism and sarcasm. As a result, the Royal Academy closed its doors because of economic failures. In the period that followed, Handel tried twice, through the foundation of two new opera companies, to fend off competition from his fellow composers Carlo Arrigoni (*1697, 1744), Giovanni Bononcini, Nicola Porpora, and Johann Adolf Hasse who were better prepared to accommodate the taste of the bourgeois audience. During that time, he composed one to three large-scale opera scores in addition to numerous instrumental concertos, chamber music works and cantatas each year. In 1737 he was eventually forced by health reasons to close the ruinous companies.

From around 1740 Handel dedicated more and more of his time to the composition of oratorios. From among the 22 works of this genre, 'The Messiah' (world premiere in 1742 in Dublin) became a standard work of the choral societies blossoming everywhere in the 19th century (its 'Halleluja' is actually one of the most frequently performed pieces of the music repertoire). Handel also appeared more and more often in public as an organist, e.g. with organ concerts large parts of which were improvised by him during the performance. In 1743 he wrote 'Dettinger Te Deum' to mark the victory of King George II over the French, and in 1749 'Music for the Royal Fireworks' in celebration of the Treaty of Aix-la-Chapelle in 1748. While composing his oratorio 'Jephta' (1751/52), Handel began to lose sight of one of his eyes. He died on Easter Saturday 1759 and was buried in Westminster Abbey.