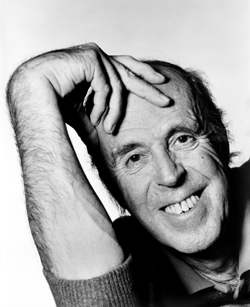 A leading composer of the American avant-garde since the 1950s, Earle Brown (1926–2002) was a major force in contemporary music. He was associated with the composers John Cage, Morton Feldman, and Christian Wolff, who, with Brown, came to be known as the New York School. In Europe, Brown’s music became known through performances and lec­tures at major festivals such as Darmstadt and Donaueschingen as early as the mid to late 1950s. Brown’s interest in a broad range of aesthetic expression, ranging from the writings of James Joyce and the poetry of Gertrude Stein, Kenneth Patchen, and others, to the work of the Abstract Expressionist painters – and particularly Jackson Pollock and Alexander Cal­der – informed his own work. His conducting techniques and experiments with “time nota­tion,” improvisation and open-form compositional structure have become part of contempo­rary compositional usage. His early influential orchestral scores include Available Forms 1 and Available Forms 2, while his Folio and Four Systems and its December 1952 continues today as a classic landmark of graphic notation. His musical friendships were noteworthy – from Bruno Maderna, who conducted first performances of many of Brown’s works, to jazz musicians such as Zoot Sims, Gerry Mulligan and Bob Brookmeyer, to Edgard Varese (with whom he had a standing weekly New York lunch date) and Virgil Thomson.
Earle Brown was also an accomplished record producer. His studies in music, mathematics and engineering, and his involvement in the 1952–54 “Project for Music for Magnetic Tape” with John Cage, David Tudor and Louis and Bebe Barron, provided him with the skills and experience to support himself as a recording engineer for many years. His most influential and widely acclaimed creation as a record producer was the 18-record Contemporary Sound Series. Brown made all artistic decisions, supervised all of the recordings of the music, took photographs for the covers and wrote the liner notes. Introducing works by composers such as Karlheinz Stockhausen, Luciano Berio, Mauricio Kagel, John Cage, Pierre Boulez, Iannis Xenakis and many others, the series became an important conduit for the presentation of contemporary avant-garde music. Working with some of the best musicians of his time, among them Cathy Berberian, Bernd and Aloys Kontarsky, David Tudor and Bruno Maderna, Brown captured the avant-garde in what would much later become a widely accepted repertoire of twentieth-century music. The series stands as a testament to Brown’s life-long generosity to his fellow composers and musicians, as well as to his ability to recog­nize and acclaim compositional excellence, no matter how far removed in style from his own work.
www.earle-brown.org