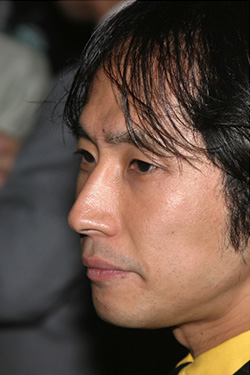 Atsuhiko Gondai was born in 1965 in Tokyo.  He studied composition at Toho Gakuen School of Music, and from 1990 to 1992 attended the Staatliche Hochschule für Musik Freiburg as a DAAD scholar. From 1993 to 1994 he was resident in Paris as a researcher in the Japanese Government Overseas Study Program for Artists, and until 1995 studied computer music at the Institut de Recherche et de Coordination Acoustique/Musique (IRCAM).


Gondai has researched musical space as a rite grounded in Catholic religious belief. In recent years he has collaborated with the Buddhist priest Shomyo chanters and broken new ground through interchange with Buddhist music.

He has also been active as a concert producer. Further, beginning with MERZBOW of noise music, he has engaged in many collaborative projects with filmmakers, dancers, choreographers, and architects. In 1999 he released the first CD of his own collected works, "ritratto rosa." In 2000 he delivered lectures at Victoria University, Wellington and at Auckland University in New Zealand. In 2003 he stayed in Bergen, Norway as an Artist in Residence and had lectures at the the Grieg Academy of the University of Bergen. He is currently based in Kanazawa and Paris where he works on composition projects.