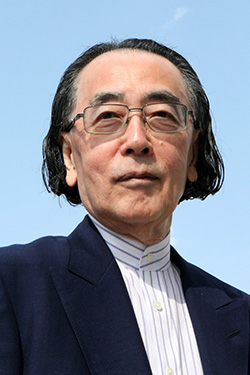 Toshi Ichiyanagi was born in Kobe, Japan, on 4 February 1933. He studied composition under Kishio Hirao, Tomojiro Ikenouchi, and John Cage. He studied piano under Chieko Hara and Beveridge Webster.

He took first place in the composition division of the 18th (1949) and 20th (1951) Mainichi Music Competition (presently the Music Competition of Japan). While studying at the Julliard School of Music in New York from 1954 to 1957, he was awarded the Elizabeth A. Coolidge Prize (1955), the Serge Koussevitzky Prize (1956), and the Alexander Gretchaninov Prize (1957).

Invited by the Festival of Institute of Twentieth Century Music he returned to Japan in 1961 and held concerts and introductions both to his own music and the new music of Japan, Europe and the United States, stimulating activitity in a variety of fields. From 1966 to 67, engaged by the Rockefeller Foundation, he returned to the U. S. and held recitals of his works all over the country.

In 1976 he was engaged by Deutscher Akademischer Austausch Dienst (DAAD) as Composer-in-Residence for the city of Berlin, where he resided for six months. At music festivals all over Europe he held concerts to introduce his own works or the works of other Japanese composers. He visited Europe repeatedly after that, receiving commissions from the European Pro Musica Nova Festival (1976), Metamusik Festival (1978), Cologne Festival of Contemporary Music (1978, 1981), Holland Festival (1979), Berliner Festwochen (1981), etc.

In 1981 he received the 30th Otaka Prize for Piano Concerto No. 1 “Reminiscence of Spaces”. In 1984 he was awarded Grand Prix of the Nakajima Prize for his activities as a composer, performer and producer, and his second Otaka Prize, this time for Violin Concerto Circulating Scenery. This violin concerto was given its American premiere at Carnegie Hall in New York in February of the same year. In June 1984, his numerous works were performed at Seibu Theatre as Theme Composer for the contemporary music festival “Music Today.” Also in June as part of the Japan France Culture Summit, with Toru Takemitsu he held a concert of orchestral works at the Théâtre des Champs-Élysées in Paris at the request of L’orchestre National de France.

In 2002 he received the 33rd Suntory Music Prize. In 2004 he assumed the post of Composer-in-Residence at the Pacific Music Festival (PMF). In 2006 he premiered his third opera White Nights.

In 1999 he was awarded the Medal with Purple Ribbon, and again in 2005 the Order of the Rising Sun, Gold Rays with Rosette, by the Japanese Government. He has been selected as one of the Persons in Cultural Merit since 2008.