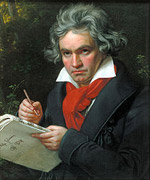 Ludwig van Beethoven is the most important symphonic composer of the Viennese Classicism. In 1781 the son of the Prince Elector's court tenor singer Johann van Beethoven became a pupil of Christian Gottlob Neefe (*1748, 1798) who introduced him to works from the pre-classical period, especially of the Mannheim School, and let him take his place at the organ already in 1782. In 1784 Beethoven became a member (violist and harpsichordist) of the court chapel in Bonn. In 1787 he went to Vienna, at the expense of the Prince Elector, to become a pupil of Mozart, but he had to break off his stay after 14 days because of his mother's serious illness. In 1792 he went to Vienna for the second time and became a pupil of Haydn (Mozart had died in the mean time). In addition, he studied theory with Johann Georg Albrechtsberger and Italian vocal composition with Antonio Salieri.

In Vienna Beethoven gave his first public performance as a pianist with his Piano Concerto in B flat major Op. 19 on 29.3.1795. The very same year he also published Op. 1, three piano trios dedicated to Prince Carl Lichnowsky. Great reception and support was bestowed on him in the houses of the Viennese aristocracy into which he was introduced by Count Ferdinand von Waldstein. As a pianist, teacher and composer, he soon enjoyed a high standing. Since he had left Bonn, he had never taken a position and mainly earned a living by composing dedication works. When King Jérôme of Westphalia called him to Kassel in 1808, Archduke Rudolph (a pupil of Beethoven), Prince Franz Joseph von Lobkowitz and Count Ferdinand von Kinsky offered him an annual salary of 4,000 florins to keep him in Vienna. Except for a journey to Prague, Dresden, Leipzig and Berlin (1796) and visits to spa towns such as Teplitz among others (1811 and 1812, encounter with Goethe), Beethoven never left Vienna.

Around 1810, Beethoven was at the zenith of his fame. However, he was profoundly affected by a hearing defect which had become noticeable since 1795 and led to increasing hardness of hearing in 1808 and eventually total deafness around 1819. He retired from society more and more and even had to give up giving concerts. Indicative of his suffering and his ethics is »Heiligenstädter Testament«, written in 1802 as a farewell letter to his brothers. In the last years of his life, communication with him was only possible in writing, as is documented by »Konversationshefte«. A liver and intestine disease, probably due to lead poisoning, caused his death in 1827. The Austrian poet Franz Grillparzer wrote the funeral address. Thousands attended his funeral on the cemetery of Währingen on 29.3.1827, Schubert being one of the 38 torchbearers at Beethoven's coffin during the funeral procession. In 1888 Beethoven's remains were moved to the Central Cemetery of Vienna.

Oeuvre:
Beethoven's oeuvre centres on instrumental music. It was due to him that it became the epitome of music as an emotional language of the people living in this world. In the works of the first creative period (until ca. 1802), the piano trios Op. 1 (1795), piano sonatas (»Sonate pathétique«, 1798/99), string quartets, symphonies (No.1 in C major 1799/1800) and piano concertos (No. 3 in C minor, 1800/02), the unmistakable 'tone of Beethoven' is fully developed: the distinct character of the principal theme which determines entirely the individual movements with regard to structure and content, no matter whether opposing and synthesizing; the tranquility and intimacy of the middle movements, the dance-like brusque or defiant nature of the scherzos, and the power of the final movements which is liberating from the inside. Later these characteristic features were deepened and their dimensions expanded: the use of the contrasting material in the development and coda (Symphony No. 3 »Eroica«), the representation of passion (»Kreutzersonate«, »Sonata appassionata«), the drama (overture »Coriolan«), the dance-like effusive (Symphony No. 7), the radiation of consolation, calmness and grandeur (adagio of Symphony No. 4, Symphony No. 6 »Pastorale«).

The late creative period, starting with the last five piano sonatas and ending with the last five string quartets, is characterized by the retreat into the inner world which was encouraged by his deafness and made Beethoven develop his late style combining the sensual communication through tones with the most profound intellectuality of compositional thinking. At the same time, the message to the people intensified in the works meant for the wide public. The highlights are Symphony No. 9 which, in order to elucidate the spiritual statement, includes the human voice in the choral finale based on the text of Schiller's »Ode to Joy«, and »Missa solemnis« in which Beethoven deliberately took up compositional church music traditions and incorporated them in his essentially symphonic style, even in his vocal oeuvre. As is indicated by the three versions and several solutions to the overture problem, his only opera »Fidelio« had caused the instrumental composer Beethoven major difficulties.

Due to Beethoven, there emerged a new kind of composing. After a constantly increasing musical audience had learned, thanks to Haydn and Mozart, to understand demanding instrumental music, this demand, and thus the demand for the novelty of the music as well as its market value continued to increase after the turn of the century. Whereas Haydn had written over 100 symphonies and Mozart almost 50 symphonies, the number of Beethoven's symphonies came to only nine, each of which having its own individual character. Beethoven's sketchbooks with more than 5,000 sheets provide an insight into his work process, into the composer's struggles and development processes.

With Beethoven, the music of the Viennese Classicism reached both its climax and its end. Classical aspects in Beethoven's music are not only the musical form which still focusses on the sonata form, but also the complete congruency of form and content. What is new in his music, as compared to Haydn and Mozart, is the emphasis of the ethical moment, the setting up of oppositions, the surging of the will against them, and the gestures of liberating efforts. This is what sets Beethoven apart from the simultaneous musical Romanticism: He does not oppose the real world to »another world«, but his music is aimed at the world to improve and refine it.

At the same time, however, Beethoven rang in the »19th century« with regard to music history: He was regarded as undisputed superlative of all previous music. Even if in the middle of this century the music was divided into the contrasts of aesthetics of form and content, programme music and absolute music, new German school and conservative school, Wagner and Brahms, both sides always quoted and referred to Beethoven.