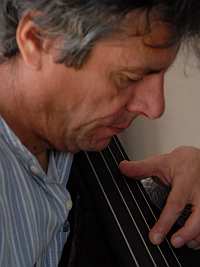 Stefano Scodanibbio (1956-2012), contrabass soloist and composer, was born in Macerata, Italy. Since the 1980s his name has been prominently linked to the renaissance of the double bass, playing dozens of works written especially for him by such composers as Bussotti, Donatoni, Estrada, Ferneyhough, Frith, Globokar, Sciarrino, and Xenakis at major festivals throughout the world. In 1987 in Rome he performed a four-hour nonstop marathon of twenty-eight pieces by twenty-five composers.
He has created new techniques to extending the timbres and range of the double bass to an extent not previously considered possible. He collaborated over a long period with Luigi Nono (“arco mobile à la Stefano Scodanibbio” is written on the score of Prometeo) and with Giacinto Scelsi. In 1996 he has been teaching contrabass at the Darmstadt Summer Courses for New Music. He regularly played in a duo with Rohan de Saram and also with Markus Stockhausen.
Active as a composer his catalog includes more than fifty works principally written for strings ("Sei Studi" for solo contrabass; six duos for all the possible combinations of the four strings; three String Quartets; "Concertale" for contrabass, strings, and percussion, etc.) and he was selected four times for the ISCM, International Society of Contemporary Music. His music theater work "Il cielo sulla terra" was premiered in Stuttgart (June 2006) and performed in Tolentino, Italy, (July 2006) as well as in Mexico City in August 2008. Of particular importance was his collaborations with Terry Riley and with the poet Edoardo Sanguineti. In 1983 he founded the Rassegna di Nuova Musica, a festival for New Music held every year in Macerata, Italy.