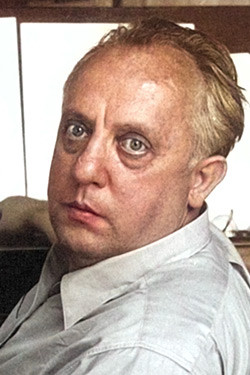 His concept of life oriented towards humanity is inscribed in all his scores. A warning in view of the atrocities of this world, but also resistance from the heart: a revocation of the spirits, love and life. (Udo Zimmermann)

Karl Amadeus Hartmann was born on 2 August 1905 in Munich and came into contact with art and music at an early stage. He studied trombone and composition at the Staatliche Akademie der Tonkunst in Munich from 1924 to 1929. Hartmann presented his first composition which displayed influences of jazz, Dadaism, persiflage technique and New Objectivity within the framework of the Opera Studio at the Bavarian State Opera. His Miserae for orchestra brought him initial international recognition at its performance at the IGNM Festival in Prague in 1935; in 1936, he won the Carillon competition in Geneva with his String Quartet No. 1. Following studies with Hermann Scherchen, Hartmann became the pupil of Anton Webern in 1941/42 whose compositional style exerted a strong influence in the following years.

In 1945, the composer was appointed as dramatic producer at the Bavarian State Theatre. Hartmann’s attempt to acquaint the audiences not only with classical modern works but also contemporary music by young composers became the guiding concept of the musica viva concerts which Hartmann organised right up until his death. The apocalyptic vision of the Gesangsszene for baritone and orchestra on texts from “Sodom and Gomorrha” remained unfinished and was published posthumously. Hartmann died on 5 December 1963.

After the seizure of power by the National Socialists in 1933 which resulted in a ban on the performance of Hartmann’s works, he regarded composition as his commitment to humanity. Several of his works are based on direct autobiographical experiences. The Sonate "27. April 1945" for piano originated as a reaction to an encounter with a train filled with prisoners who were expelled from the camp Dachau by the SS shortly before the end of the war. The sombre underlying atmosphere blends with the expression of solidarity and hope of salvation from tyranny. Melodic fragments with Jewish influences permeate the opera Simplicius Simplicissimus which was composed in 1934/35 (and revised in 1956/57) following encouragement by Scherchen and incorporates songs and chorales. The libretto based on Grimmelshausen’s Baroque novel affirms the dignity of the individual confronted by a world of barbarity and establishes parallels between the Thirty Years’ War and Fascism.

Alongside the violin concerto (Concerto funebre) composed in 1939, Hartmann’s eight symphonies provide an impressive and committed testimony to the composer’s instrumental oeuvre. During the post-war years, Hartmann began to revise the substantial symphonic sketches which he had created during his period of internal emigration. The preliminary phases of the 1st Symphony with the subtitle “Versuch eines Requiems” [Attempt at a Requiem] date back to the year 1935 and the 3rd Symphony (1948/49) is based on a “Sinfonia tragica” from 1940. The Symphonie Concertante (5th Symphony), completed in 1951, also utilises material from a previously conceived composition, the burlesque Concertino for trumpet and wind ensemble (1933). Within the framework of a compositional commission by the Bavarian broadcasting company Bayerischer Rundfunk, Hartmann revised his “Symphonie L’Oeuvre” based on Zola which was given its first performance in 1953 as the 6th Symphony. In 1963, the 8th Symphony was premiered in Cologne. The work appears as the concentrated sum of the entire symphonic and concerto oeuvre of Hartmann with its juxtaposition of scherzo, fugal and finale elements.

From 1948 onwards, Hartmann’s compositions were performed with increasing frequency. In 1949, he was awarded the Music Prize of the City of Munich. This was followed by the Kunstpreis from the Bavarian Academy of the Fine Arts (1950), the Arnold Schoenberg Medal from the IGNM (1954), the Große Kunstpreis from the federal state of North-Rhine Westphalia (1957) and the Ludwig Spohr Prize from the city of Braunschweig (1959), the Schwabinger Kunstpreis (1961) and the Bavarian Order of Merit (1959). Hartmann became a member of the Academy of Arts in Munich (1952) and in Berlin (1955) and received an honorary doctorate from the Spokane University in Washington in 1962.