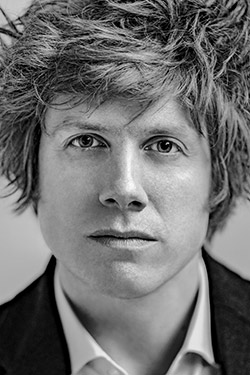 Joolz Gale feels equally at home with modern and period instrument orchestras, offering not only a historically informed approach to baroque, classical and early romantic repertoire but also an extensive knowledge of chamber, choral and vocal repertoire. His passion for special projects and new concert formats has meanwhile made him one of the world's leading arrangers of symphonic music.

Born in England, Joolz Gale initially studied as a violinist and read Music at the University of Oxford before furthering his studies at Royal College of Music, London as a singer. Graduating in 2007, he became an inaugural apprentice to the Monteverdi Choir under Sir John Eliot Gardiner, at which time he began to develop his skills as a conductor. In the same year, he took part in the Gustav Mahler Conducting Competition, resulting in an immediate invitation to make his début radio recording with Bayerischer Rundfunk and the Bamberger Symphoniker (works by Stravinsky and Parry). He has since gone on to make conducting debuts with choirs and orchestras throughout Europe, Asia and Latin America, including Orquesta de Cadaqués, Orquesta y Coro de la Comunidad de Madrid, China National Symphony, Cor de Cambra del Palau de la Música Catalana, Real Orquesta Sinfónica de Sevilla, Shanghai Symphony and Taiwan Philharmonic as well as further guest engagements with orchestras in Poland, Argentina, Brazil, Mexico, South Africa, Venezuela and Turkey. Recent highlights have included a return to Bamberg for the theatre production "Die Deutsche Seele" with Orchesterakademie of Bamberger Symphoniker and Handel's "Messiah" in Barcelona's Palau de la Música (recorded for Medici TV).

They have been reviewed and featured widely in German media (such as 3sat Kulturzeit, ZDF Aspekte, rbb Stilbruch and WDR 3) and recorded several live concerts for Deutschlandfunk Kultur, RBB Kulturradio, NDR Kultur and SWR Classic, as well as an award-winning debut CD, Mahler’s 9th Symphony (ARS-Produktion). In December 2013, Joolz Gale performed and toured this same arrangement with the Camerata of the Royal Concertgebouw Orchestra. A follow-up CD recording with Ensemble Mini - Mahler's 10th Symphony - will be released in 2020.

Upcoming concerts in 2020 include a tour with Junge Deutsche Philharmonie (Beethoven's 7th), guest appearances in Berlin, Köln and Moscow as well as a significant tour schedule with Ensemble Mini that includes Budapest, Dortmund, Hamburg, Moscow and New York as well as new projects with RIAS Kammerchor. Outside conducting, Joolz Gale contributes as a blogger for the Spectator and appears as a speaker, presenter and contributor for various special projects on radio and television.

As a countertenor, he has performed and recorded as both soloist and chorister with groups such as OAE & AAM, at festivals such as Edinburgh, Budapest and BBC Proms, at venues such as Concertgebouw Amsterdam, Konzerthaus Wien & Salle Pleyel Paris and with labels such as Universal & Naxos.