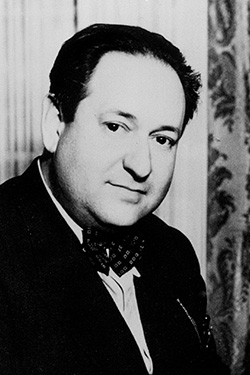 Music is music whether composed for the stage, the conductor’s desk or for the cinema. The form can change and the method of notation can be different, but the composer cannot make any compromises in what he considers to be his musical convictions. (Erich Wolfgang Korngold)

Erich Wolfgang Korngold was born on 29 May 1897 in Bruenn, Moravia, in the Austro-Hungarian Empire (today Brno, Czech Republic). This musical prodigy was the second son of Julius Korngold, prominent music critic of the Neue Freie Presse. Richard Strauss and Giacomo Puccini were two of the admirers of the musically precocious child’s compositional ability. Encouraged by his father, Korngold received his first music theory lessons at the age of six. When only nine, he performed his fairy tale cantata “Gold” for Gustav Mahler who immediately recommended Alexander von Zemlinsky as a teacher. In 1910, the ballet-pantomime Der Schneemann received its premiere in the Vienna Court Opera under the baton of Franz Schalk. The work was discussed in the cultural pages of the newspapers and certain critics doubted the authorship of the young composer. In 1916, public acclaim was again achieved with the premiere of the one-act operas Violanta and Der Ring des Polykrates under the direction of Bruno Walter. At the age of 20, Korngold performed his military service as a recruit in the military band of an infantry regiment. Three years later, the triumphal success of his opera Die tote Stadt began on a variety of European stages. With his fourth opera Das Wunder der Heliane (1927), Korngold was caught in the crossfire of a cultural dispute, partially initiated by his father, which had been sparked off by Krenek’s topical opera "Johnny spielt auf”. The cooperation with Max Reinhardt began in 1929 with the adaptation of Johann Strauss’s “Fledermaus”. In 1934, the director invited Korngold to Hollywood for a production of "A Midsummer Night's Dream". For the next four years, the composer divided his time between Vienna and Hollywood, ultimately settling in Hollywood in 1938, following the annexation of Austria by Nazi Germany.
In Hollywood he became one of the most sought after film music composers in the USA. In the post-war years, the composer was unsuccessful in his attempts to re-establish himself on European cultural stages. Korngold died in Hollywood on 29 November 1957.

Korngold’s music theatre works made him the most popularly performed German-speaking opera composer between 1910 and the 1930s alongside Richard Strauss. The opera Die tote Stadt (1916-1919) today continues to be included in the regular music theatre repertoire. The libretto based on Rodenbach’s novel “Bruges-la-morte” was written by Korngold himself in cooperation with his father under the pseudonym Paul Schott. Korngold’s music for the Symbolist, morbid text developed on the back of Late Romantic tonal worlds to form an independent expressive language tracing the psychology of the plot in great detail. Wunder der Heliane (1923-1926) which was considered by the composer as his most significant work marks a turning point in Korngold’s oeuvre. The monumental orchestral forces and the demands on the singers reach the limits of what is performable. During his second career as film music composer for the Warner Brothers Studios, the composer was able to bring the genre of symphonic film music to perfection. Korngold was one of the most influential co-founders of the “sound of Hollywood” with his classics such as “The Adventures of Robin Hood” (1938), “The Sea Hawk” (1940) and “The Sea Wolf” (1941).

The violin concerto (Concerto in D major 1937-1939/1945), the cello concerto (Concerto in C, 1946) and the Symphony in F# for large orchestra (1947-1952) guarantee that Korngold’s works have their place on the concert stage. These three compositions are all late works and connect the expertise of the classical composer with his experiences within the realms of film music. In his concert works, Korngold drew partly on the best thematic material from his film scores, in the creation of his significant post-war compositions. The solo parts are virtuoso, the orchestral writing displays skill in the changes of tonal colouring and the emotionally dense music is characterised by a noble yet yearning melos. Particularly in the symphony, ambitious rhythms are paired with a rugged chromaticism which overflows into atonality.

Korngold’s film music received four Oscar nominations. The composer was awarded the prize for the "Best Original Score" 1936 (“Anthony Adverse”) and 1938 (“The Adventures of Robin Hood”). Since 1995, the Erich Wolfgang Korngold Prize has been awarded by the foundation Deutsche Kinemathek for the lifework of an outstanding film music composer.

1897
Born in Brünn (today Brno) on 29 May, the son of the soon to be Viennese music critic Dr. Julius Korngold
1903
Piano and music theory lessons
1905
First extant composition
June 1906
Plays his fairy-tale cantata "Gold" to Gustav Mahler who pronounces him a genius, recommending that he be sent to Alexander von Zemlinsky for tuition
1909
His father has the first piano sonata and the piano pieces "Don Quixote" and "Der Schneemann" privately printed to send them to musicians
1910
The ballet pantomime "Der Schneemann" is orchestrated by Zemlinsky and performed at the Vienna Court Opera. Universal Edition prints the Piano Trio, Op. 1
1911/12
With the "Sinfonietta" based on "Motiv des fröhlichen Herzens", Korngold demonstrates his mastery of the large late-Romantic orchestra
1916
The two one-act operas "Violanta" and "Der Ring des Polykrates" are premièred in Munich under the direction of Bruno Walter. Siegfried Trebisch draws Korngold's attention to Rodenbach´s novel "Bruges-la-morte" which he himself translated into German. On the basis of this material, Julius and Erich Korngold work on the libretto of the opera "Die tote Stadt" under the pseudonym "Paul Schott"
1917
The twenty-year-old is called up as a recruit into the military band of an infantry regiment
1920
Première of the opera "Die tote Stadt". The Symbolist, Art Nouveau-related work with decorative and expressionist elements in the music sets out on a triumphant tour of the European theatres
1921
Finishes "Lieder des Abschieds" for alto and orchestra
1923
Korngold arranges "Eine Nacht in Venedig" by Johann Strauss for the Theater an der Wien
1924
Marries Luise von Sonnenthal. Earns additional money by conducting and by arranging operettas
1927
Première of the opera "Das Wunder der Heliane" which Korngold considers to be his most important work. It does, however, not become as successful as his previous operas: this time, Křenek's "Jonny spielt auf" is the opera of the year. Korngold is appointed professor at the Vienna Academy of Music
1929
Begins collaborating with Max Reinhardt: new production of "Die Fledermaus" by Johann Strauss in Berlin
1932
Starts to work at the opera "Die Kathrin". Première of the "Baby-Serenade" in which Korngold, for the first time, incorporates jazz elements in his style
1934/35
First stay in America: Korngold arranges Mendelssohn´s music for Max Reinhardt´s film version of "A Midsummer Night's Dream"
1935/36
Second stay in America: Korngold writes film scores for Paramount and Warner. "Anthony Adverse" receives an "Oscar" for the best film music of the year 1936
1937
Première of the song cycle "Unvergänglichkeit". The interest of the Viennese public is waning, the political situatuion in Austria gets increasingly worse for Korngold
1938
Back to Hollywood, the Korngolds are taken by surprise by the "Anschluss" of Austria by National Socialists. It is only now that Korngold decides to write film scores regularly. for the music of "The Adventures of Robin Hood" he is awarded his second Oscar
1939
Première of the opera "Die Kathrin" in Stockholm
until 1946
Korngold composes mainly film music, using his income to support many refugees. Together with Max Steiner, he stands for a new music style in Hollywood: the highly illustrative but independent music partly intervenes in the story of the film by expressing atmosphere and introducing leitmotifs
from 1945
Makes attempts to return to classical absolute music: in 1946 première of the Cello Concerto, in 1947 première of the Violin Concerto. Both works are inspired by film scores
1949
Returns to Vienna. Successful première of the "Symphonic Serenade" Op. 39 in 1950, conducted by Wilhelm Furtwängler. Other Korngold performances are poorly attended, getting bad reviews
1951
Disappointed, the Korngolds go back to America
1951
Radio première of "Die stumme Serenade"
1947-52
Creates his last major work, the "Symphony in F sharp"
1954
Trip to Europe to attend both the première of the symphony and the scenic première of the comedy "Die stumme Serenade" (The Silent Serenade), and to supervise the scoring of his last film assignment "Magic Fire" – a biography of Richard Wagner
1957
Korngold plans another symphony and an opera after Grillparzer´s "Das Kloster bei Sendomir". Dies on 29 November as a result of a cerebral thrombosis