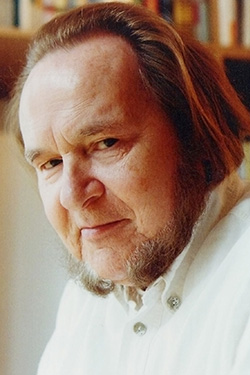 Born in Chemnitz on 23 August 1928, Gerd Natschinski grew up in Dresden where he started studying conducting at the Music Academy immediately after the war.  Due to his father’s wish he stopped this and continued with piano lessons, music theory and composition lessons on a private basis in Chemnitz.  In the meantime he worked as a music teacher and church musician in Claußnitz.


Being twenty years old, he gave concerts of entertaining music with his own orchestra in Leipzig and frequently conducted his own arrangements and compositions during radio broadcasts.  From 1951 until 1953 he became a master pupil of Hanns Eisler. In 1952 Gerd Natschinski was promoted as Chief Conductor of the Radio and Entertainment Orchestra of the Berlin Broadcast Service.  At the same time the DEFA commissioned him frequently as composer for film music.

Since the 60s Natschinski created successful works for the stage as well as entertaining concert and orchestral works of high reputation. 1960 his widely renowned career as a composer of operettas and musicals started with Messeschlager Gisela; a success which was followed by Mein Freund Bunbury (1964), being the German musical with the most performances and productions in the history of  the genre, and with all his twelve works for the stage.  His full evening ballet Hoffmanns Erzählungen, commissioned by the Komische Oper Berlin and produced by Tom Schilling in 1986, was on the programme for several seasons.

1978 saw Natschinski become director of the Metropol Theatre, leaving this position after three years to concentrate on composing.

For his work as a composer Natschinski has received several international prizes and was awarded three times with the National Award for Arts and Literature of the GDR.  For many years he was delegated to the CIAM at the UNESCO and was vice president of the composers association of the GDR. He is still member of the board of the writers union, the Franz-Grothe-Foundation and the AG Drama.

Gerd Natschinski lived in Berlin where he died on 4 August 2015.