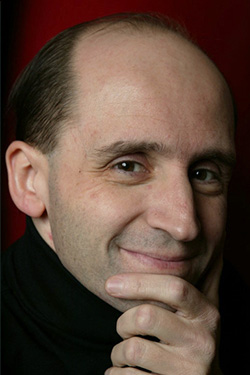 Emile Naoumoff sits down at the piano every day to play a broad selection of improvisations which he subsequently uploads onto his YouTube channel. His channel currently features over 8 200 improvisations alongside a wealth of individual pieces by Mozart, Chopin, Schubert and many more composers, all performed at an impeccable pianistic and artistic standard.

Naoumoff, born in Sofia in 1962, was soon recognised as a musical prodigy and came under the tutorship of Nadja Boulanger from the age of seven onwards. Boulanger described her final student who composed his first piano concerto when he was only ten under the supervision of Yehudi Menuhin as a “gift in my old age”. Naoumoff was signed up as a composer by Schott Music at the young age of 18. Shortly afterwards, he also achieved his breakthrough on the piano: his global career as a solo pianist was launched when he stood in for another pianist in 1984, performing Tchaikovsky’s first piano concerto under Yuri Ahronovitch without a rehearsal.

This performance was followed by close cooperations with Leonard Bernstein, Igor Markevitch, the Los Angeles Philharmonic Orchestra, the Berliner Symphoniker, and the Wiener Symphoniker. Among the highlights of his career were the performances of the Grieg Piano Concerto with the Los Angeles Philharmonic in the Hollywood Bowl and his own piano concerto version of Mussorgsky’s Pictures at an Exhibition with the National Symphony Orchestra in the Kennedy Center in Washington DC conducted by Mstislav Rostropovitch.

Naoumoff has given master classes, taught in his own Music Academy in Gargenville (near Paris) and was appointed as professor at the Indiana University Jacobs School of Music in 1998. Jacques Chirac honoured him by awarding him the Médaille d’honneur de Paris, he received the Prix de Composition de l’Académie des Beaux Arts, and recently, he was appointed Associate Professor at the School of Music of the Indiana University in Bloomington.  Naoumoff gave master classes in the USA, Spain, Luxembourg and Japan, and he directs his own Music Academy near Paris (Gargenville) teaching after the principles of Nadia Boulanger.

Naoumoff’s compositional output also includes significant chamber music works and diverse transcriptions for piano which can be heard on both his own video journal and YouTube.

His works at Schott include a.o. a Piano Concert, an instrumentation of Mussorgsky’s "Pictures of an Exhibition" and selected chamber music.