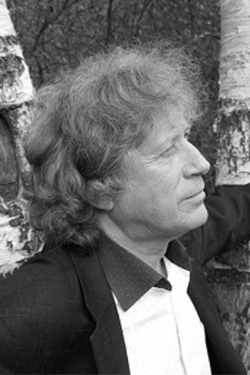 Victor Ekimovsky attended the Moscow Gnessin Music School, and subsequently studied composition with A. Khachaturian and musicology with K. Rosenschild at the Gnessin Institute. He also gained a doctorate at the Leningrad Conservatory for a thesis entitled Olivier Messiaen. Life and Works. (Moscow, 1987).

Ekimovsky’s music has created a stir among composers in Moscow since the 1970s on account of its unusual imaginative power, its inventive structural ideas and innovative instrumental writing. Ekimovsky, unlike other contemporary Russian composers, has continued to be a faithful adherent of “New Music” and has not succumbed to the temptations of the “post-modern” style. His works employ the whole arsenal of post-war avant-garde techniques – from dodecaphony to instrumental theatre. The principal characteristic of his works is their unique quality – none of them bears a resemblance to any other. They are all based on or have a specific and frequently surprising idea or ensemble, e.g. Balletto for a conductor and variable ensemble (1974), The Trumpets of Jericho for 30 brass instruments (1977) or Doppler-Effect for 100 performers, to be performed outdoors (1997).

In addition to being a composer, Ekimovsky has also worked as a musicologist, editor and impresario. Since 1996, when he succeeded Edison Denisov, he has been president of the Association for Contemporary Music (ASM). And he has written a highly unusual Automonographie (Moscow, 2008), which, like Rimsky- Korsakov’s famous “Chronicle of My Musical Life”, will be an important source for music historians about music in Moscow during the last third of the 20th century.