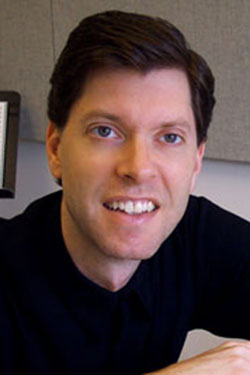 Pierre Jalbert's music immediately captures one's attention with its strong gesture and vitality. Rich in instrumental color and harmonically engaging, its narrative is dramatically compelling yet always logical in its flow. In the orchestral Chamber Symphony, big sky, and Fire and Ice, and in numerous chamber compositions, he synthesizes an array of current musical resources into bold, deeply satisfying, personal statements that surprise and delight. (American Academy of Arts and Letters)

American composer Pierre Jalbert has developed a musical language that is engaging, expressive, deeply personal and distinctly his own. Jalbert has received major commissions from the American Composers Orchestra, the Houston, California, Albany, and Vermont Symphonies, and two from Meet the Composer: a “Magnum Opus Project” consortium that included the Oakland East Bay, Marin, and Santa Rosa Symphonies, and Commissioning Music/USA for Music from Copland House, and Los Angeles Chamber Orchestra, where he served as Composer-in-Residence from 2002-2005.

His much sought after chamber music has been performed by Midori, the Chamber Music Society of Lincoln Center, the Escher, Ying, Borromeo, Maia, and Chiara String Quartets, Pittsburgh New Music Ensemble, Janaki String Trio, and the Caramoor Festival. Recent commissions include works for the Houston Symphony, Chamber Music Society of Lincoln Center, Arizona Friends of Chamber Music, and the Emerson String Quartet. He has also served as Composer-in-Residence with the California Symphony and Chicago's Music in the Loft.

Jalbert’s many honors include the Rome Prize, a Guggenheim Fellowship, the Copland House/Borromeo String Quartet Award, the Chamber Music Society of Lincoln Center’s Stoeger Award, given biennially “in recognition of significant contributions to the chamber music repertory,”and a 2010 award from the American Academy of Arts and Letters. As a student, his compositions were honored by both ASCAP and BMI. Jalbert’s orchestral work In Aeternam, which has been performed internationally - the Seattle and London Symphony Orchestras among others - garnered the highly prestigious BBC Masterprize. Jalbert’s discography features recordings by David Finckel and Wu Han, the Los Angeles Chamber Orchestra, and the Ying Quartet, and is available on the ArtistLed, Cedille, Albany, New Dynamic, Gasparo, Helicon, Summit Records labels and others.

Jalbert has drawn inspiration from a variety of sources ranging from plainchant melodies to natural phenomena. His music is tonally centered, incorporating modal, tonal, and, at times, dissonant sonorities, while retaining a sense of harmonic motion culminating in a completed musical journey. His rhythmic shapes are cogent, often with an unmistakable sense of underlying pulsation. Jalbert’s primary oeuvre is instrumental and he is particularly noted for his mastery of color. In both his chamber and orchestral scores, he creates timbres that are vivid yet refined.

Born in Manchester, NH into a family with roots in Quebec, Jalbert grew up in northern Vermont. At age 5, he began piano lessons and immersed himself in the classical repertoire. His appreciation of French and English folk songs and Catholic liturgical music helped him gain a deep respect for music that communicates powerfully with an economy of means. Following undergraduate studies in piano and composition at Oberlin Conservatory, Jalbert earned a Ph.D in Composition at the University of Pennsylvania, where he studied with George Crumb. Jalbert is Professor of Composition and Theory at Rice University's Shepherd School of Music in Houston, where he has taught since 1996, and currently serves as co-artistic director of Musiqa, a locally based contemporary chamber ensemble. Recent premieres include String Theory (2016) with the East Coast Chamber Orchestra, Strata (2015) with the Rhode Island Philharmonic, From Dusk to Starry Night (2015) for mezzo-soprano and chamber ensemble with Sasha Cooke and the River Oaks Chamber Orchestra, led by David Danzmayr, Howl (2014), with clarinetist Charles Neidich and the Pro Arte Quartet, as well as Piano Trio No. 2 (2014) with the Morgenstern Piano Trio. Upcoming events include the world premiere of In Terra for orchestra, with the Shepherd School Symphony Orchestra at Carnegie Hall on October 28, 2016, as well as the premiere of "Violin Concerto" with The Saint Paul Chamber Orchestra on June 9, 2017 and the Los Angeles Chamber Orchestra on March 17, 2018.

1967
Born in Manchester, New Hampshire
1989
Receives undergraduate degree from Oberlin Conservatory
Awarded a BMI Foundation Composition Award
1992
Awarded a second BMI Foundation Composition Award
1993
Receives PhD in Composition at the University of Pennsylvania, studying under George Crumb
1994
Awarded a Guggenheim Fellowship
1996
Appointed Professor of Composition and Theory at Rice University’s Shepherd School of Music in Houston, TX
1999-2002
Composer-in-Residence with the California Symphony under Barry Jekowsky
1999
Recipient of a Copland House Residency Award
2000
California Symphony premieres "In Aeternam", led by Barry Jekowsky
Recipient of the Rome Prize
2001
Awarded the BBC Masterprize for his orchestral work In Aeternam
2002-2005
Composer-in-Residence with the Los Angeles Chamber Orchestra
2003
Composer-in-Residence with Chicago’s Music in the Loft Chamber Music Series
2004
Jeffrey Kahane leads the Los Angeles Chamber Orchestra in the premiere of "Chamber Symphony"
2005
The Houston Symphony premieres "big sky"
2006
Recipient of the Chamber Music Society of Lincoln Center’s Elise L. Stoeger Prize
2007
Barry Jekowsky leads the California Symphony in the premiere of "Music of air and fire"
2009
Named Distinguished Composer of the Year by MTNA (Music Teachers National Association) for "Sonata for Piano"
2010
Receives an Academy Award in Music from the American Academy of Arts and Letters
Marin Alsop leads a performance of "In Aeternam" as part of the Cabrillo Festival of Contemporary Music
2011
The Houston Symphony premieres "Shades of Memory" with Hans Graf conducting
The Boston Symphony Orchestra performs "Music of air and fire" as part of the Tanglewood Festival
"Fire and Ice" performed by the Cabrillo Festival of Contemporary Music and conducted by Marin Alsop
"Trio" for clarinet, violin and piano premiered by Chamber Music Society of Lincoln Center
"String Quartet No. 5" premiered by the Emerson String Quartet
2012
Receives a second Copland House Residency Award
2015
Jalbert's "Strata" receives its premiere by the Rhode Island Philharmonic, conducted by Larry Rachleff.
Mezzo-soprano Sasha Cooke and the River Oaks Chamber Orchestra, led by David Danzmayr, premiere "From Dusk to Starry Night"
2016
The East Coast Chamber Orchestra debuts Jalbert's "String Theory" for string orchestra.