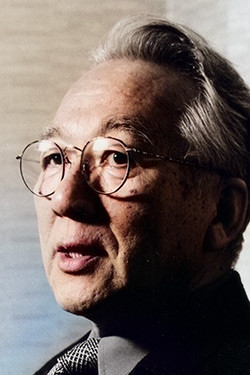 Joji Yuasa, born on August 12, 1929, in Koriyama, Japan, is a self taught composer. He first became interested in music while a pre medical student at Keio University, and in 1952 turned to music full time when he joined a young artists’ group, the Experimental Workshop in Tokyo. Since then, Yuasa has been actively engaged in a wide range of musical composition, including orchestral, choral and chamber music, music for theater, and intermedia, electronic and computer music.

He has won numerous commissions for his orchestral, chamber, chorus and electronic compositions including commissions for orchestral works from the Serge Koussevitzky Music Foundation, Saarländischer Rundfunk-Sinfonieorchester, Helsinki Philharmonic Orchestra, Japan Philharmonic Symphony Orchestra, NHK Symphony Orchestra, Canada Council, Suntory Music Foundation, IRCAM and National Endowment for the Arts of the U.S.A., among others.

As a guest composer, lecturer and judge, Yuasa has contributed to the Festival of Arts In This Century in Hawaii (1970), New Music Concerts in Toronto (1980), the Asian Composers League in Hong Kong (1981), a concert tour for Contemporary Music Network by the British Arts Council (1981), the Asia Pacific Festival in New Zealand (1984), Composers Workshop in Amsterdam (1984, ’87), Internationale Ferienkurse Für Neue Musik in Darmstadt (1988), Lerchenborg Music Tage (1986, ’88) and Pacific Music Festival in Sapporo (1990), COMPOSIUM 2002 in Tokyo, Romania Contemporary Music Festival (2009), Internationale Ensemble Modern Akademie (2009), Stanford University (2009) among others. In 2005 his Responsorium from Requiem of Reconciliation, commissioned by Internationale Bachakademie Stuttgart as a commemorate the anniversary of the end of World War II, was premiered.

From 1981 to 1994, Yuasa was actively engaged in music research and education at the University of California, San Diego (UCSD). Presently, he is professer emeritus at UCSD and Nihon University and a honorary menber of ISCM.