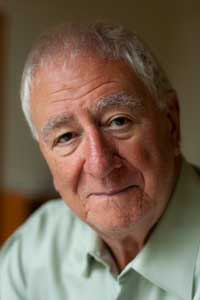 … in the Canti Trilogy… Rands unspools a shining thread to guide us and keep us safe. Still another pleasure is the alluring sensuousness of surface Rands stretches over troubling depths. The composer has an extraordinary ear; the sonorities and ideas are deep, dark and magical.
—The Boston Globe
Through more than a hundred published works and many recordings, Bernard Rands is established as a major figure in contemporary music. His work Canti del Sole, premièred by Paul Sperry, Zubin Mehta and the New York Philharmonic, won the 1984 Pulitzer Prize in Music. His large orchestral suites Le Tambourin won the 1986 Kennedy Center Friedheim Award. Conductors including Barenboim, Boulez, Berio, Maderna, Marriner, Mehta, Muti, Ozawa, Rilling, Salonen, Sawallisch, Schiff, Schuller, Schwarz, Silverstein, Sinopoli, Slatkin, von Dohnanyi, and Zinman, among others, have programmed his music.

The originality and distinctive character of his music have been variously described as ‘plangent lyricism’ with a ‘dramatic intensity’ and a ‘musicality and clarity of idea allied to a sophisticated and elegant technical mastery’ - qualities developed from his studies with Dallapiccola and Berio.

Rands served as Composer-in-Residence with the Philadelphia Orchestra for seven years, from 1989 to 1995 as part of the Meet The Composer Residency Program for the first three years, with 4 years continued funding by the Philadelphia Orchestra. Rands’ works are widely performed and frequently commercially recorded. His work, Canti d’Amor, recorded by Chanticleer, won a Grammy Award in 2000.

Born in England, Rands emigrated to the United States in 1975 becoming an American citizen in 1983. He has been honored by the American Academy and Institute of the Arts and Letters; Broadcast Music, Inc.; the Guggenheim Foundation; the National Endowment for the Arts; Meet the Composer; the Barlow, Fromm and Koussevitsky Foundations, among many others. In 2004, Rands was inducted to the American Academy of Arts & Letters.

A dedicated and passionate teacher, Rands has been guest composer at many international festivals and Composer-in-Residence at the Aspen and Tanglewood festivals and was Walter Bigelow Rosen Professor of Music at Harvard University.