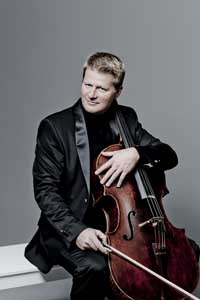 The Hungarian cellist László Fenyö (b. 1975) has belonged to the world elite of cellists since he won the 2004 International Pablo Casals Contest in Kronberg, Germany. He is hailed by both audiences and critics as one of today’s most exciting artists, possessing the unique capability of presenting the intentions of the composer but also allowing the music to speak at the forefront, thereby capturing and fascinating his audiences. Through his breathtaking technical skills and emotive expressiveness, his concerts become special experiences, where the music can be newly explored with every performance.

László Fenyö has performed with the most important orchestras throughout the world, several times with conductor Krzysztof Penderecki. In 2005 he received the Franz Liszt Prize and the Junior Prima Prize in 2008.

László Fenyö began his musical education in Hungary. Already at the age of 13 he became a junior student with Professor László Mezö at the Franz Liszt Academy of Music in Budapest. Later, while continuing his studies in Lübeck with Professor David Geringas, his brilliant technique, secure sense of style, and his unusually broad repertoire, brought him several prizes at important competitions. Among them, the International Music Contest in Geneva, the Rostropovich Contest in Paris, the Adam Cello Contest in Christchurch, and the Contest of the Hungarian Radio in Budapest. After completing his studies, he decisively extended his musical horizons under the tutelage of Bernard Greenhouse.

László Fenyö plays a cello made by Matteo Goffriller from 1695.

www.laszlo-fenyo.com
Your search returned no results.