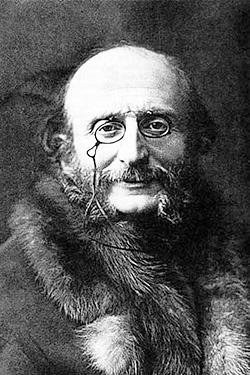 Jacques Offenbach was born in Cologne on 20 June 1819 into a Jewish family of musicians. Thanks to the efforts of Luigi Cherubini, the gifted young cellist was able to commence studies at the Paris Conservatoire when he was only fourteen – an extraordinary privilege not only in view of his youth, but also because of his German ancestry. Offenbach soon gained a reputation in Paris salons as the chamber music partner of such renowned musicians as Flotow, Rubinstein, Mendelssohn and Liszt. He composed many works for his instrument – among them one of the major cello concertos of the nineteenth century – but his greatest passion was for the stage. He was for a time a member of the orchestra at the Opéra Comique where he was able to gain an in-depth knowledge of contemporary French repertoire. Offenbach shared the fate of numerous young composers whose works were ignored by the theatres of Paris; his reaction was to found his own theatre company which he named “Bouffes parisiens”. In his double role as artistic director and house composer, he succeeded in revolutionising European entertainment theatre during the decades following 1855.

He initially produced short single-act works including Les Deux Aveugles, Ba-Ta-Clan, and Croquefer before composing his first full-length opera Orphée aux Enfers which was a great triumph. Offenbach acquired French citizenship in 1860 and made his debut the same year at the Paris Opéra with his ballet Le Papillon. In 1861, he was awarded the decoration “Chevalier” of the Legion d’honneur. From 1862 onwards, Offenbach divided his time between Paris, Etretat in Normandy, Bad Ems and Vienna – a city which alongside Paris was swiftly becoming the most significant location of his career. His large-scale Romantic opera Die Rheinnixen was composed for Vienna in 1864 and he subsequently returned to this music during work on his later composition Contes d’Hoffmann. During the next six years, he would experience the zenith of his popularity. In cooperation with his ingenious librettists Henri Meilhac and Ludovic Halévy, he produced La Belle Hélène, Barbe-Bleue, La Vie parisienne, La Grande-Duchesse de Gérolstein, La Périchole und Les Brigands. With these compositions which were later collectively termed as “Offenbachiades”, he established a new genre of politically-satirically based entertainment theatre which conquered the stages of the world.

Offenbach’s reputation began to fade with the outbreak of the Franco-Prussian War in 1870/71. He became unpopular in France because of his German ancestry and also in Germany due to the decadent French character of his works. He did not however allow this period of unpopularity to interrupt his creative drive. One of his major works, the Romantic opera Fantasio based on a play by Musset, was performed in 1872 firstly at the Opéra Comique and then in Vienna. In 1873, he was appointed director of the Théâtre de la Gaîté and turned his hand to a completely different genre: the “féerie”. He initially reworked his “lucky charm” Orphée aux Enfers, but simultaneously embarked on a new series of collaborations with the playwright Victorien Sardou (Le Roi Carotte, La Haine and Don Quichotte).

Plagued by mounting debts, he set off on a concert tour through America in 1876 which brought him substantial success. On his return, he resumed work on a project which he had begun some time previously: Les Contes d’Hoffmann. In 1879, he was able to enjoy the great acclaim received by La Fille du tambour-major. Offenbach died on 5 October 1880, the creator of over 600 compositions including more than 130 stage works, but unfortunately without having been able to experience the first performance of his 'opus summum’, the Contes d’Hoffmann.