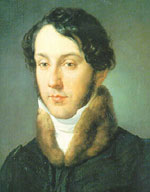 Fryderyk (French: Frédéric) Chopin, Polish composer and pianist, son of an immigrated French language teacher and a Polish mother; one of the most famous piano virtuosos and composers of the 19th century.
Life and Work:
Chopin studied with Józef Elsner, among others, and since 1831 had lived as a famous pianist, composer and much sought-after teacher in Paris where he found an important circle of friends (Franz Liszt, Hector Berlioz, Honoré de Balzac, Heinrich Heine, Giacomo Meyerbeer). In 1838 a lung disease forced him to go to Mallorca to take a cure where he was accompanied by the author George Sand. In 1848, suffering from his incurable disease, he went on a concert trip to England and Scotland.
Chopin was the originator of a new piano style in which high virtuosity is completely in the service of poetic expression. This style is characterized by a cantabile melody inspired by the bel canto of the Italian opera and especially by Polish folk music, particularly rich ornamentation which is given a structural function beyond its merely embellishing character, a chromatic harmony rich in modulation, a varied rhythm often inspired by Polish folk music (mazurkas, polonaises), and subtle dynamic, agogic distinctions (tempo rubato). Chopin only wrote works for the piano or works in which the piano is of central importance; he was one of the masters of the lyrical piano piece (nocturnes, preludes, impromptus) in which the étude was included as well and which could also be expanded into large forms, e.g. into the purely instrumental ballad first documented with Chopin. The Sonatas in B flat minor and B minor are among the highlights of their genre. Thanks to Franz Liszt, Sergey Rakhmaninov, Aleksandr Skriabin and Karol Szymanovski, Chopin's piano style had a lasting effect until into the 20th century.
Works:
Works for piano and orchestra: Piano Concertos in E minor Op. 11 (1830) and F minor Op. 21 (1829); Variations on »Là ci darem la mano« (from Mozart's »Don Giovanni«) Op. 2 (1827); Great Fantasia on Polish Tunes Op. 13 (1828); Concert Rondo »Krakowiak« Op. 14 (1828); Grande Polonaise in E flat major Op. 22 (1831/32). Piano Trio in G minor Op. 8 (1828/29); Sonata for Violoncello and Piano in G minor Op. 65 (1845/46).
Piano works: 16 polonaises, 60 mazurkas, 22 waltzes, 3 sonatas (in C minor Op. 4, 1827; in B flat minor Op. 35, 1839; in B minor Op. 58, 1844), 20 nocturnes, 27 études, 4 ballads, 25 preludes, 4 impromptus, 4 scherzos, variations, fantasias. 17 Polish Songs Op. 74 (182947).