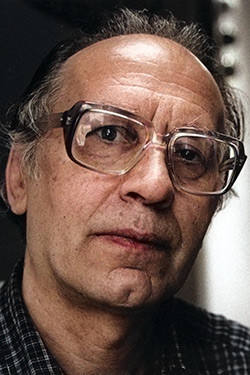 Music should be so transparent that one can see the bottom and that poetry shimmers through this transparency. (Valentin Silvestrov)

Valentin Silvestrov was born in Kiev on 30 September 1937. He came to music relatively late, at the age of fifteen. He at first taught himself, and then, between 1955-58, went to an evening music school while during the day studying to become a civil engineer; from 1958 to 1964 he studied composition and counterpoint, respectively, with Boris Lyatoshinsky and Lev Revutsky at Kiev Conservatory. He then taught at a music studio in Kiev for several years. He has been a freelance composer in Kiev from 1970 to 2022, fled from Ukraine in 2022 to Germany and currently lives in Berlin.

Silvestrov is considered one of the leading representatives of the "Kiev avant-garde", which came to public attention around 1960 and was violently criticized by the proponents of the conservative Soviet musical aesthetic. In the 1960s and 1970s his music was hardly played in his native city; premieres, if given at all, were heard only in Russia, primarily in Leningrad (now St. Petersburg), or in the West. His Spectrums for chamber orchestra, for example, was premiered to spectacular acclaim by the Leningrad Philharmonic under the baton of Igor Blashkov in 1965. In 1968 the same conductor gave the premiere of the Symphony no 2.

The works of the young composer, especially his Symphony no 3, were awarded the Koussevitzky Prize in 1967, and in 1970 Silvestrov’s Hymn for six orchestral groups received an honorary title at the international Gaudeamus competition and festival in Utrecht.

Despite much-acclaimed performances in the West, which the composer was not permitted to attend, his music was ignored in his own country on the official level, though unofficially it created quite a stir, which is the reason why it was sometimes banned. For many years there were at least a few enthusiastic performers who played his music from time to time.

This situation gradually changed with Silvestrov's growing international acclaim. One of his earliest champions was the American pianist and conductor Virko Baley, an aficionado and longtime advocate of contemporary Ukrainian music in general and Silvestrov's works in particular. It was Baley who brought about in 1985 the first performances of Postludium for piano and orchestra and in 1988 of the symphony for baritone and orchestra Exegi monumentum in Las Vegas as well as a Valentin Silvestrov 50th Birthday Concert in New York. Silvestrov became a visiting composer at the Almeida Music Festival in London (1989), Gidon Kremer's Lockenhaus Festival in Austria (1990), and various festivals in Denmark, Finland, and Holland. Later he was "composer in residence" in Hungary (2007 Pannohalma), Poland (2009 Nostalgia-Festival, Poznan), Austria (2013 Klangspuren, Schwaz), Switzerland (2016 Davos-Festival "Young artists in concert"), the Netherlands (2017 The Hague, Unheard Music Festival) and in Germany (2017/18 Staatskapelle Weimar).

Since the end of the 1980s, the number of performances has increased, even in Russia and the Ukraine. In 1989 Silvestrov took part in the "Alternativa" New Music Festival in Moscow, and in 1992 in the "Five Evenings with the Music of Valentin Silvestrov" in Ekaterinburg. In 1994 he participated in the "Sofia Gubaidulina and Her Friends" festival in St. Petersburg, and a year later in an event devoted to Sofia Gubaidulina, Arvo Pärt and himself. In 1998, on the occasion of his 60th birthday, there was a Silvestrov festival in Kiev with many concerts and a scholarly conference organized by the National Tchaikovsky Academy of Music of Ukraine, the former Kiev Conservatory.

During the 1990s, Silvestrov's music was heard throughout Europe as well as in Japan and the United States. In 1998-99, he was a visiting fellow of the DAAD (German Academic Exchange Service) in Berlin, where three of his major works have been premiered to date: Metamusic (March 1993), Dedication for violin and orchestra (November 1993), and Symphony no 6 (August 2002).

In celebration of Silvestrov’s 80th birthday there are many concerts across the world from America to Europe, from Russia, the Ukraine to Japan: Gidon Kremer performs Dedication, Vladimir Jurowski is conducting Symphony no 3, Roman Kofman the Symphonies no 5 and 7, John Storgårds Symphony no 8; the world premiere of his Violin Concerto (2016) takes place in Weimar on 14 January 2018 featuring the young violinist Valeriy Sokolov. Further renowned pianists, chamber musicians and choirs, as well as a conference in Moscow, join the series of jubilee festivities.

Silvestrov has always maintained his independence, both in his early avant-garde period and after his stylistic volte-face in the 1970s. In recent decades he has dispensed with the conventional compositional devices of the avant-garde and discovered a style comparable to western "post-modernism". The name he has given to this style is "metamusic", a shortened form of "metaphorical Music".

Of all the many translations of the Greek prefix meta (after/post-, above/supra-, behind/ultra-, outside/extra-, etc.) Silvestrov prefers "above" or "behind". He regards metamusic as "a semantic overtone above Music". In a certain sense, "metamusic" stands for a universal style (a concept that Silvestrov has been using a long time) and a universal language. He understands it to mean "a general 'dictionary’ that belongs to no one but can be used by anyone in his or her own way."

His work has affinities with the era of the "classical" fin-de-siècle, especially Gustav Mahler, with whom Silvestrov is frequently compared. The difference is that the lexicon of contemporary musicians is unlimited. The lack of delimitation forces composers to search for the lost ontological meaning of music as art. Silvestrov believes that melody is an important precondition for the survival of Music – a view that reveals the lyric basis of his art regardless of the period in his career. The fact that he sees melody in a more comprehensive way is reflected in his vocal music which plays a special role in his musical output. Silvestrov is the author of two large and many shorter song cycles in addition to isolated songs and cantatas, most of them on poems by classical authors. His attitude to poetry is based on the notion that he does not wish to disturb its innate musicality and attempts to subordinate himself to it.

"Poetry ... is the salvation of all that is most essential, namely, melody as a holistic and indispensable organism. Either this organism is there, or it is not. I believe that Music – even if it cannot be 'sung' – is song nevertheless; it is neither philosophy nor a world view, it is the song of the world about itself, as it were a musical testimony to existence." This same approach also governs Silvestrov's instrumental music, which is always richly infused with both logical and melodic tension.

Since 2001/02, Silvestrov has again been working with small forms and "pure" melodies, composing numerous cycles ('families', 'colonies') for various small instrumentations (more than 260 cycles for piano solo): waltzes, lullabies, postludes, nocturnes, barcaroles, pastorals, serenades. Silvestrov describes the short pieces as 'bagatelles' in the centre of which is the melody, and in which he tries to seize and 'halt' the 'melodic moment', intonations, calls and motifs which flash past, without imposing the burden of what is termed thematic elaboration.

Since 2005, Silvestrov has again increasingly devoted himself to choral music, particularly to sacred choral music which, however, is not intended for liturgical use.

During the political unrest in the Ukraine Silvestrov fought for his country with 'musical means', composing numerous choral works, 'Majdan Hymns' and 'Prayers for the Ukraine'.

1937
Born in Kiev on 30 September
1942
Beginning of dealing with music (self-taught)
1955-58
Attendance at an evening music school, first compositions while studying at the Kiev Institute of Engineering and Construction
1958-64
Studies at the Kiev Conservatory, composition with Boris Lyatoshynsky and counterpoint with Lev Revutsky
1958
Leading representative of the "Kiev avant-garde"
1963
Teacher at a Kiev music studio for several years
1967
Prize of the Koussevitzky Music Foundation for his 3rd Symphony "Eschatophonie" and other works
1967
Expulsion from the Composers’ Union of the USSR
1970
Honorary title at the international Gaudeamus Competition for his work "Hymn" (1967)
1970
Freelance composer
1989
People’s Artist of the Ukrainian SSR
1995
Shevchenko National Prize of the Ukraine
1996
The death of his wife Larissa leads to a decisive turning point in his compositional work.
1997
Award of the Ukrainian Order of Merit 3rd class
1998-99
Guest of the DAAD Artist-in-Berlin-Program
2004
Purchase of his manuscrips and part of his archive by the Paul Sacher Stiftung
2004
Medal for "Intellectual Courage"
2005
Renewed focus on choral music
2008
Movie "Dialoge" by Dorian Suspin on the composer Valentin Silvestrov (Minor Film, coproduction with ZDF and arte)
2011
Honorary Doctorate of the National University of Kyiv Mohyla-Academy
2022

Flees Ukraine and lives in exile in Berlin, Germany