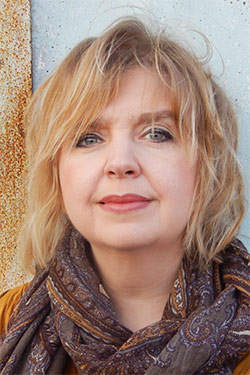 Tatjana Komarova grew up in Moscow, taking early music lessons from her parents who are both musicians, her father (Vladimir Komarov) being also a composer. In 1987, after her piano studies, she began to study composition at the Tchaikovsky Conservatory in Moscow with Professor Nikolai Sidelnikov who laid the foundation for her compositional work and had a significant influence on her artistic development.

Komarova’s Œuvre includes compositions for piano, lieder, choral and orchestral works and in particular chamber music in every possible instrumentation. Her works have already seen a considerable number of international performances, and have been played at Carnegie Hall, Wigmore Hall, Wiener Konzerthaus, Concertgebouw and Lucerne Festival among others, as well as important venues and festivals in Germany.

In collaboration with four other composers, she has created the opera Das Jahrmarktsfest zu Plundersweilern (after Johann Wolfgang von Goethe, arranged by Peter Hacks) for the Rheinsberg Castle Chamber Opera. Furthermore, Komarova composed Sonnenuntergänge auf B 612 for nine instruments, commissioned by Paul Sacher (1998), or the Concerto for piano and orchestra, commissioned by the Musikkollegium Winterthur (2000/01) and premiered by Lars Vogt and Heinrich Schiff. Her compositions have been broadcast many times on the radio (a.o. BBC, WDR, NDR, SDR, Radio France) and on television (ZDF and WDR), some have already been recorded on CD. Throughout the past ten years, her works have been presented at the contemporary festival “Moskauer Herbst” several times.

Further commissions include works for Heinrich Schiff, Boris Pergamenschikow, Danjulo Ishizaka, Tomoko Akasaka and the Belcea Quartet, and premieres have been given by the Lucerne Festival in 2002, the Ruhr Piano Festival in 2003 and Klangspuren Schwaz. In 2004, Komarova was composer-in-residence with the Orchestre de Bretagne, and the same year she was commissioned by Elena Bashkirova-Barenboim to write Kalenderblätter, a clarinet quartet for the Jerusalem Chamber Music Festival. Dialogische Essenzen for viola, cello and orchestra was written for the 2011 Kronberg Academy Cello Festival.

Alongside Lars Vogt, she founded the annual chamber music festival “Spannungen”, at the hydropower plant Heimbach in 1998, and has been closely associated with it ever since. As composer-in-residence, she wrote her work Umhüllt von Licht und Nebel for Violin and Piano, which premiered at the festival in 2014.

In recent years, Komarova has been increasingly dedicated to the promotion of young musicians. Since 2010, she has been running the music studio “Notenfänger”, which also provides an important platform for art exhibitions and chamber music concerts at the “Salon Notenfänger”. She has founded the studio in Berlin, where she also runs the artist agency "Komarova Artists Management”.