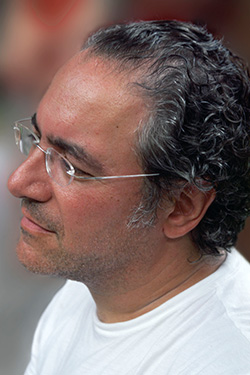 … the deepest pleasures in this beautiful and richly affecting new work are far more intimate and more familiar. The piece draws on the reliable themes of musical theater - love, family, fate and death - and does it with almost unerring precision. This is a potent addition to the operatic repertoire and a triumph for both the company and general director David Gockley, who backed the undertaking. - Joshua Kosman, San Francisco Chronicle on The Bonesetter's Daughter

Growing up in Texas, composer Stewart Wallace played in a rock band and sang as a cantor in the synagogue. For his thesis at the University of Texas, he wrote his first opera, though he was studying literature and philosophy, not music. At 28 years old, he had his first major premiere Where's Dick? at the Houston Grand Opera. This was the beginning of fruitful collaborations with librettist Michael Korie and director Richard Foreman. Wallace has gone on to collaborate with a diverse group of artists including Christopher Alden, Evelyn Glennie, Marc Ribot, Chen Shi–Zheng and Amy Tan. His unconventional and highly theatrical body of work is at once intensely rhythmic, melodic and emotionally compelling.

The music of Stewart Wallace returned to San Francisco Opera with The Bonesetter's Daughter, his collaboration with Amy Tan based on her bestselling novel. Researching the opera, Wallace and Tan traveled together extensively in China, studying various regional forms of Chinese opera, attending funerals in small villages of northern Shanxi Province, and exploring the music of the ethnic minorities in the southern mountains of Guizhou. Commissioned by the San Francisco Opera, The Bonesetter's Daughter features a Beijing Opera percussion section, KunJu singer, Chinese Rock Singer, two suonas (double–reeded trumpets) and twelve Chinese acrobats. Chen Shi–Zheng directed the September, 2008 world premiere at the San Francisco Opera with Steven Sloane conducting. Coinciding with the world premiere, Chronicle Books published Fate! Luck! Chance! Creating THE Opera of The Bonesetter's Daughter by Ken Smith.

Hopper's Wife imagines American Scene painter Edward Hopper married to Hollywood gossip columnist Hedda Hopper with Ava Gardner as Hopper’s model. This opera with a Korie libretto premiered at the Long Beach Opera with Christopher Alden directing and Michael Barrett conducting. Mark Swed noted in The Los Angeles Times, “Hopper's Wife is brave, bold and important. It dares to stand apart from the current trend in American opera for realist historical drama. Instead it radically reimagines history. Hopper's Wife is an arresting attempt at the level of music, poetry and theater to grapple with one of the most meaningful issues in art today, namely: how, in a postmodern age dominated by popular culture, can high art remain meaningful?” In April 2016, the New York City Opera presented the opera's East Coast premiere in a new production directed by Andreas Mitisek and conducted by James Lowe.

Like The Bonesetter's Daughter, many of Wallace's works have featured unusual instruments and soloists. Skvera for electric guitar and orchestra, composed for "Guitar God" Marc Ribot, was commissioned by the National Symphony Orchestra. Inspired by a trip to Skvera, the Ukrainian shtetl his grandparents fled before the Russian Revolution, the four movement work premiered at the Kennedy Center in 2004 with Leonard Slatkin conducting. Marin Alsop conducted the West Coast Premiere at the Cabrillo Festival.

Wallace composed a trilogy of works for percussion soloist Evelyn Glennie: the concerto Gorilla in a Cage, performed in Germany, France, Britain and the United States, and the chamber work The Cheese and the Worms, which Glennie and pianist Philip Smith toured internationally in over 100 performances, and Irving in Indonesia, for Glennie on Indonesian gongs and Margaret Leng Tan on toy piano, premiered in 2001 at London’s Wigmore Hall as part of the Evelyn Glennie and Friends series. Book of Five, for Icebreaker, the 12 person British amplified ensemble, and orchestra, premiered in 2002 at Carnegie Hall with Steven Sloane conducting. Commissioned by the American Composers Orchestra, the Bochum Symphony and the ASCAP Foundation, this five-part, forty-minute work is a deeply personal response to the months following the World Trade Center attacks and the birth of Wallace's son. Steven Sloane also conducted the European premiere with the Bochum Symphony.

Peter Pan, Wallace’s first ballet, premiered with the Fort Worth Dallas Ballet in 2000. Based on J. M. Barrie's novel with choreography and scenario by Graham Lustig, Wallace's three-act ballet was called "one ballet where you can almost close your eyes because the music is so good.” (The Fort Worth Star Telegram) The Madison Ballet will performed Peter Pan in 2008 with choreography by Earle Smith. Wallace’s film scores include Book of Love, written and directed by Alan Brown and Persons of Interest, directed by Alison Maclean and Tobias Perse. Both films premiered at the 2004 Sundance Film Festival. For director and writer David Barker, Wallace composed scores for Seven Days (Rotterdam Film Festival, 2004) and Afraid of Everything (Sundance Film Festival, 2000).

Stewart Wallace was awarded the Guggenheim Fellowship in 2006. He was Music Alive Composer–in–Residence at the National Symphony for 2001–2002 and is the recipient of numerous awards including fellowships and commissions from the National Endowment for the Arts, New York Foundation for the Arts, Opera America, Meet the Composer, Mary Flagler Carey Trust and others. He was a fellow at the inaugural Institute for the Arts and Civic Dialogue at Harvard. Residencies at the MacDowell Colony and Yaddo have been indispensible to the development of his work. In the Spring of 2000, Toni Morrison invited him to be Artist-in-Residence at Princeton University as part of her Princeton Atelier. Stewart Wallace's most recent work, She Told Me This, a monodrama for mezzo-soprano and ensemble inspired by and adapted from the opera The Bonesetter's Daughter, premiered in October, 2010 with Musiqa of Houston.
1960
Born in Philadelphia, Penssylvania
1987
Receives ASCAP Young Composer Award
1988
Houston Grand Opera presents his first major opera premiere, "Where's Dick?"
Receives National Endowment for the Arts Award and ASCAP Young Composer Award
1989
"Kabbalah", an opera in 7 movements, premieres on Brooklyn Academy of Music's Next Wave Festival
1990
Receives New York Foundation for the Arts Award and ASCAP Young Composer Award
1991
"Hopper's Wife", an opera in five scenes, premieres at Long Beach Opera, directed by Christopher Alden and conducted by Michael Barrett.
"Kabbalah" is recorded and released on Koch International Classics, conducted by Michael Barrett.
1995
"Harvey Milk" premieres at Houston Grand Opera, directed by Christopher Alden and conducted by Ward Holmquist (performed by the Houston Symphony)
1997
"Gorilla in A Cage", for percussion and orchestra, premieres with Evelyn Glennie and the Bochum Symphony Orchestra, conducted by Steve Sloane.
"Kaddish for Harvey Milk" debuts with the Madison Symphony conducted by John DeMain.
1998
"Harvey Milk" is recorded and released on Teldec Classics, featuring San Francisco Opera Orchestra and Chorus, conducted by Donald Runnicles
2000
"Peter Pan", a ballet in three acts, premieres at Fort Worth Dallas Ballet, with John DeMain conducting the Madison Symphony
2001
Wallace serves as Music Alive Composer-in-Residence at the National Symphony
2006
Receives Guggenheim Fellowship and New York Foundation for the Arts Award
2008
"The Bonesetter's Daughter" premieres at San Francisco Opera conducted by Steve Sloane
2010
"She Told Me This", for mezzo-soprano and ensemble, premieres with Musiqa of Houston
2016
New York City Opera presents East Coast premiere of "Hopper's Wife" with new production directed by Andreas Mitisek.