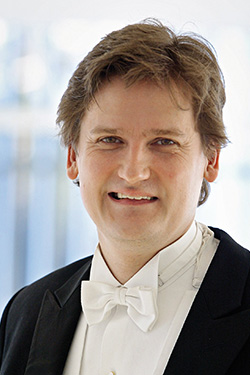 Olli Mustonen is a postmodern composer building a bridge over Western classical music from baroque to minimalism, from late romanticism to the new spirituality of the 21st century. Music can capture the secret of life – a current of sounds. […] His music transports the idea of direct experience, an ability that has sunk into oblivion in these technocratic times. (Susanna Välimäki)

Olli Mustonen is something of a musical force of nature – a conductor, composer and pianist in equal measure, imbued with boundless energy and enthusiasm. (The Advertiser, 15 September 2015)

Born in Helsinki on 7 June 1967, Olli Mustonen took his first harpsichord lessons at the age of five and was taught to play the piano by Ralf Gothóni at the age of seven. At the age of six, he made his first composition attempts, and from 1975 studied composition with Einoiuhani Rautavaara. Soon, Mustonen was much sought after, both as a conductor and as a concert pianist (studies with Eero Heinonen).

Since 1989, Mustonen has been playing an active role in the musical scene of his home country; first, he became artistic director of the Korsholm Music Festival and from 1990-1992 of the Turku Music Festival as well. He is co-founder and director of the Helsinki Festival Orchestra, and since 2003 has been conducting the chamber orchestra Tapiola Sinfonietta.

As a pianist, Mustonen has given concerts with numerous major international orchestras such as the London Symphony Orchestra, the Royal Concertgebouw Orkest, the Chicago Symphony Orchestra, the Berlin Philharmonics, and others. In addition, he maintains close working relations with renowned conductors such as Daniel Barenboim, Pierre Boulez and Christoph Eschenbach. In 1999, he performed the world premiere of Rodion Shchedrin’s Piano Concerto No. 5, which is dedicated to him, with Esa-Pekka Salonen and the Los Angeles Philharmonic Orchestra. For his recording of 24 Preludes and Fugues by Dmitri Shostakovich and 25 Preludes by Charles-Valentin Alkan, Mustonen received both the Edison Award and the Gramophone Award in 1992. In 2019 Mustonen is the awardee of the Hindemith Prize of the City of Hanau in 2019.

Mustonen’s predilection for contrapunctally interwoven compositions and works of the 20th century which take up ideas from the 17th and 18th centuries (e.g. the Bach arrangements by Ferruccio Busoni and the cycles of preludes and fugues by Paul Hindemith or Shostakovich), is reflected in his own works as well. The concentration on instrumentation and rhythm as well as the use of genre names such as Gavotte, Toccata or Petite Suite are points in favour of this affinity. His Sonata for violoncello and piano illustrates how he establishes connections between baroque counterpoint and modernism, the latter distinctly apparent at the end of the piece.

Mustonen's works attain their individuality through their fresh tonal language rooted in the sonority of the music of his come country. There are clear programmatic references in his work’s titles: e.g. Kaksi Metsätunnelmaa ("Two Forest Impressions"), Vanha kirkko Petäjävedellä ("The Old Church at Petäjävesi") or Kolme poikaa, kolme puuta ("Three Trees, Three Sons").

In 2011, Mustonen began to explore the symphonic tradition. His first contribution to this genre was Sinfonia 1 for baritone and orchestra which was premiered in Tampere by the Tampere Filharmonia under the baton of the composer. Subsequent performances took place in Helsinki, Russia, Germany, and Australia. The text is based on a famous Finish poem by Eino Leino. Also for his Sinfonia 2 with the subtitle "Johannes Angelos", Mustonen was inspired by literature: The novel "The Dark Angel" by Mika Waltari is not set to music, for the symphony is purely orchestral, but provides the subtle program as found in symphonic poems. This work has been premiered in 2014 by the Helsinki Philharmonic Orchestra and Olli Mustonen conducting.

While it is the pianist who is to the fore in the concert halls throughout the world, it is the conducting and composing activities of Mustonen from Hausjärvi (Finland) which are becoming of growing interest to the public.

As a pianist and conductor, Olli Mustonen is represented by Hazard Chase.
1967

Born in Helsinki (FIN) on 7 June