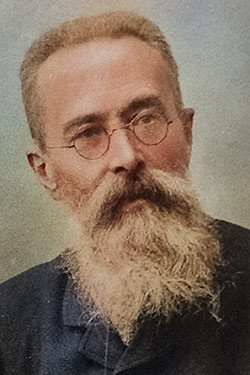 Nikolay Andreyevich Rimsky-Korsakov, Russian composer, took instrumental lessons during his Navy training days and in 1862 met Mily Balakirev who fostered his compositional education, Modest Mussorgsky and other Russian-oriented musicians. In 1871 he was appointed professor of instrumentation and composition at the St. Petersburg Conservatoire, was director of the Free School of Music from 1874-81 and was quite active as a conductor and teacher. Among his pupils were Alexander Glazunov, Alexander Grechaninov, Ottorino Respighi, Igor Stravinsky and Sergey Prokofiev.

Rimsky-Korsakov was the most prolific and, due to intensive self-studies, technically most skilled composer of the Mighty Handful. The main focus of his oeuvre is, on the one hand, on 15 operas, the multitude of forms and wide variety of style of which show influences of Mikhail Glinka, Russian folk music and later even Richard Wagner, and, on the other hand, on orchestral works which are in the tradition of Hector Berlioz and Franz Liszt and can mostly be classified as programme music, in addition to choral works, chamber music and piano works, songs and transcriptions (such as 'Khovanshchina' and 'Boris Godunov' by Mussorgsky). Rimsky-Korsakov's harmony combines chromatic and enharmonic boldness with archaic church tonality; his virtuoso instrumentation had a lasting effect on composers of the following generation, such as Claude Debussy, Maurice Ravel and Igor Stravinsky.
Works: