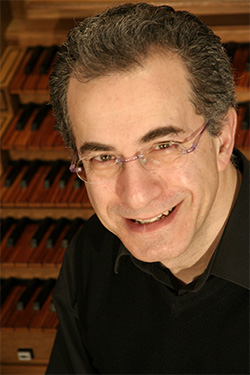 Music is the word of the unspeakable. (Naji Hakim)

Naji Hakim was born in Beirut on 31 October 1955. He was a student of Jean Langlais, also studying with Roger Boutry, J.C. Henry, Marcel Bitsch, Rolande Falcinelli, Jacques Castérède and Serge Nigg at the Conservatoire National Supérieur de Musique de Paris. In addition, he has a teacher’s diploma in organ from Trinity College of Music, London.

He was titular organist at the Basilique du Sacré Coeur in Paris from 1985 to 1993, and at the Église de la Trinité from 1993 to 2008, as successor to Messiaen. Today, he is professor of harmony at the Conservatoire National de Région de Boulogne-Billancourt and visiting professor at the Royal Academy of Music in London. Hakim is member of the Consociatio Internationalis Musicae Sacrae in Rome and holds an honorary doctorate from the Saint-Esprit University in Kaslik, Lebanon.

Hakim's music is influenced by many different cultural, religious and ethnic sources. His main sources of inspiration are Gregorian and Maronite chant, Lutheran chorale, Danish hymns, folk songs, the Bible, and the poetry of other artists. Moved by the tragic events in the Middle East and the outbreak of the Lebanon War, Hakim composed Aalaiki'ssalaam ("Peace be with you") for orchestra in 2006. In this piece a Maronite-Marian melody is developed into a chain of seven variations. The Augsburger Symphonie, commissioned by St. Anna in Augsburg, was written in 2011. This church composition is based on Martin Luther’s liturgical music and includes references to his German Mass (1526). Luther’s unchanged original texts and melodies, along with their theological and melodic articulations, are developed throughout the ten movements of this annunciation symphony. On 31 July 2015, Hakim’s poème dansé Baalbeck was premiered by the Lebanese Philharmonic Orchestra in Baalbeck. This orchestral work, inspired by Lebanese folk music, is dedicated to the composer’s son Jean-Paul.

Hakim has received numerous first prizes at international composition and organ competitions and was awarded the André Caplet Prize of the "Académie des Beaux-Arts" in 1991. Pope Benedict XVI conferred on him the "Pro Ecclesia et Pontifice" medal in 2007.