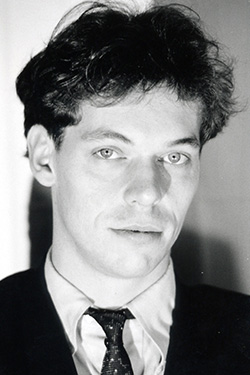 Hans-Jürgen von Bose was born in Munich on 24 December 1953. His childhood was characterized by frequent moves of his family, boarding schools and stays abroad. In 1969, after first self-taught music studies, he began to deepen his knowledge at the Hoch Conservatoire in Frankfurt where he was given lessons in piano and music theory.


After finishing school in 1972, von Bose began to study music at the Frankfurt Academy of Music with Hans Ulrich Engelmann (composition) and Klaus Billing (conducting and piano).


In 1974 he attended the International Summer Courses for New Music in Darmstadt for the first time, and attracted attention with the successful world première of his String Quartet No. 1 in Frankfurt. Soon, further compositions by von Bose who moved to Munich as a free-lance composer in 1976, were awarded international recognition. To name but a few of his numerous scholarships, awards and distinctions: Berlin Arts Prize (1977), scholarships of the Villa Massimo in Rome (1980 and 1985), member of the Bavarian Academy of Fine Arts in Munich (1985), Schneider-Schott Music Award (1988), Music Encouragement Award of the Ernst-von-Siemens Foundation (1994) and Prize of the Christoph-and-Stephan-Kaske Foundation in recognition of his outstanding educational achievement (1998). Von Bose received commissions from renowned music theatres such as the Hamburg State Opera (Blutbund, 1977), or from world-famous orchestras such as the Berlin Philharmonic (Idyllen, 1982/83).


From the late 1980s, von Bose has concentrated increasingly on educational activities, first as member of the jury of the Hitzacker Summer Music Days and as teacher at the Weikersheim courses "Jugend komponiert", then as visiting professor of composition at the Salzburg Mozarteum for a short time in 1991, and finally, since 1992, as professor of composition at the Munich Academy of Music in succession to Wilhelm Killmayer.


In addition to vocal, orchestral and chamber music compositions, von Bose has written ten works for the stage up to now. Among his most successful operas is the opera 63: Dream Palace which was performed for the first time at the Munich Biennial in 1990 and has been awarded the BMW Music Theatre Award and the Prix de Composition Musicale de la Fondation Prince Pierre de Monaco.


Characterized by a special expressiveness and subjectivity, von Bose's music, unlike the serial composition technique of the 1950s and 1960s, does not centre on technical innovation. In his works, von Bose processes findings in astrophysics, neurobiology and chaos research, and develops a new musical concept of structure and time which is not determined by conventional linearity and purposefulness. His compositional work centres on the "longing for lost beauty and substance".