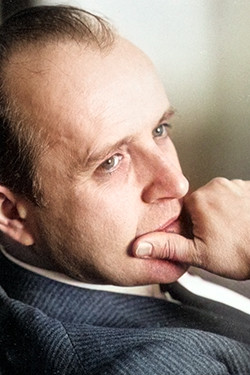 If anyone reckons that all that I am attempting to express in my music is a little nostalgia and lots of humour and optimism, well that is exactly how I would like to be remembered.  (Nino Rota)

Nino Rota was born in Milan on 3 December 1911. He gained a reputation as a child prodigy at the early age of twelve with the performance of the oratorio L’infanzia di San Giovanni Battista which he had composed four years previously. His pianist mother ensured that he received a solid musical education and Rota began studies at the Conservatory in Milan the very same year. In 1925/26, he composed the fairy tale opera Il principe porcaro based on a story by Hans Christian Andersen. Following his studies with Ildebrando Pizzetti, Rota went to Rome in 1926 where he studied at the Santa Cecilia conservatory with Alfredo Casella and received his diploma in piano and composition three years later. Following the recommendation of Arturo Toscanini, he subsequently studied composition (with Rosario Scalero) and conducting (with Fritz Reiner) at the Curtis Institute in Philadelphia from1931 to1932. He made acquaintance with Aaron Copland and developed an interest in American folklore, major Hollywood films and the music of George Gershwin. On his return to Italy, he completed his doctoral thesis in 1937 on the 16th century musicologist Gioseffo Zarlino. Rota was appointed as professor at the Conservatory in Bari in 1939 and director of the same institute in 1950 (until 1977) where one of his most well-known pupils was Riccardo Muti. The composer’s lifelong collaboration with Federico Fellini began in 1952. Rota died in Rome on 10 April 1979; his extensive estate is supervised by the Fondazione Cini in Venice.

Rota attracted the attention of both public and press in the 1930s with chamber music and orchestral works. The composer was a notable imitator of older musical styles. In Rota’s symphonic works, it is the association with Romantic music in the style of Dvorák which particularly comes to the fore, whereas his fascination with Neo-Classical forms can be observed in his chamber music which at times displays a touch of parody.

Rota composed a total of 150 film scores which include compositions for outstanding classics such as Federico Fellini’s La dolce vita (1960), I clowns (1970), Amarcord (1973), Il Casanova di Federico Fellini (1976), Luchino Visconti’s Il Gattopardo (1963), Giulietta degli spiriti (1965) and Francis Coppola’s The Godfather (1972). Rota was ingenious in fulfilling the wishes of film directors, and the success of his film scores cannot merely be attributed to the composer’s extraordinary melodic concepts, but to an equal degree on the direct relationship of the music to the image. Music itself becomes the main theme in Prova d’orchestra (1979), Rota’s final collaboration with Fellini. The deterioration within the sphere of musical life becomes a caricature of modern society.

Rota’s output for concert hall and stage includes ten operas, 23 ballet and stage compositions, three symphonies, three concertos each for piano and cello and a substantial range of choral works and chamber music. The opera Aladino e la lampada magica (1963-65) based on the well-known fairy tale from the “Arabian Nights” received its first performance in Naples in 1968. The ballet suite Le Molière imaginaire (1976-78) is one of Rota’s last major compositions for music theatre. In addition to the film scores which exist in a large variety of arrangements ranging from piano solo to orchestra, it is primarily Rota’s chamber music works such as the Sonata en sol for viola and piano (1970) and the Trio for clarinet, cello and piano (1973) which are currently included in the concert repertoire of numerous musicians.

In 1973, Rota received both a Grammy Award and the Golden Globe for his film score for Coppola’s cinematic work of the century The Godfather. The composer also received an Oscar for the best film music for his score for Part II of The Godfather in 1975.

1911
Born in Milan on 3 December as grandson of the composer Giovanni Rinaldi
1923-26
Studied at the Milan Conservatoire
1923
At the age of twelve, Rota conducted the oratorio "L'infanzia di San Giovanni Battista" which he had composed when he was eight
1926
Completed the fairy opera "Il Principe Porcaro" with his own libretto based on a tale by Hans Christian Andersen
1926
Studied at the Accademia di Santa Cecilia in Rome
1929
Took a degree in piano and composition
1931
Studied at the Curtis Institute in Philadelphia with Fritz Reiner (conducting) and Rosario Scalero (composition)
1937
Completed a PhD in literature at the University of Milan with a thesis on Gioseffo Zarlino
1937-38
Teacher of music theory at the Liceo Musicale in Taranto, Italy
1939
Lecturer at the Conservatoire of Bari
1942
Began to work with the Lux Film Company. During the following ten years, Rota composed music for around 60 films.
1950-77
Director of the Conservatoire of Bari; the institute’s most famous student was Riccardo Muti
1952
Began collaboration with Federico Fellini on the film "Lo sceicco bianco" ("The White Sheik")
1972/74
Film score for "The Godfather" and "The Godfather: Part II" by Francis Ford Coppola
1973
BAFTA, Golden Globe and Grammy Award for the film music of "The Godfather"
1975
Oscar for "The Godfather: Part II" in the category "Best Music, Original Dramatic Score"
1977
Awarded the "David di Donatello" Prize for the film score for "Fellini’s Casanova"
1979
Died in Rome on 10 April