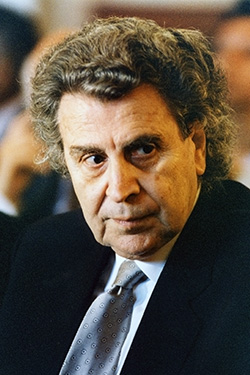 Mikis Theodorakis was born on the Greek island of Khios in the Aegean Sea on 29 July 1925. He grew up with Greek folk music and was early influenced by the Byzantine liturgy. Even as a child, he decided to become a composer.

Theodorakis’ life has been characterized by his political commitment to the Greek people and their freedom, by persecution and struggle for survival. His activities as resistance fighter during the occupation of Greece by German, Bulgarian and Italian troops led to his arrest and torture in 1943. The Civil War of 1947-49 to him meant being tortured again and finally banished to the penal colonies of Ikaria and Makronissos, where he barely survived.

From 1945 Theodorakis studied intermittently with Philoktitis Economidis at the Odeion music school and from 1954-1959 with Eugène Bigot and Olivier Messiaen at the Paris Conservatoire. In 1957 he was awarded the gold medal of the composition competition of the World Festival in Moscow for his ’Suite No.1’ and in 1959 the American Copley Prize for the best European composer. Furthermore he received the first prize of the International Institute of Music in London. During that time, he created ballet musics such as Greek Carnival, Les Amants de Téruel and Antigone in close collaboration with international theatres.

This successful period was interrupted by a bitter cultural struggle in Greece in which right-wing and left-wing groups and factions were engaged in fierce controversies. Theodorakis became one of the leading personalities among the renewers of Greece. After the assassination of the left-wing politician Grigoris Lambrakis in 1963 he founded the Lambrakis Youth and took his seat in the Greek Parliament. During that time, he also notched up great successes and achieved worldwide fame with compositions such as the film music Zorba the Greek and the oratorio Axion Esti. The internal political disturbances of the following years led to the formation of a big and a small junta and their coup d’état. Theodorakis founded the underground movement ’Patriotic Front’. Shortly afterwards, his music was banned, and he was arrested and imprisoned in the concentration camp of Oropos. He was released in 1970 in response to an international initiative of important artists such as Dmitri Shostakovich, Hanns Eisler and Leonard Bernstein.

Having become a symbol of the European student movement, not least by Zorba the Greek, Theodorakis started to live in exile in Paris from 1970. At concert tours he called for further resistance to the military dictatorship and for the restoration of democracy in his home country where he could return to as a politician in 1974. At that time, his compositional work focussed mainly on numerous large-scale song cycles.

It was not until the beginning of the 1980s that he moved back to Paris and fully resumed composing. He began to create increasingly symphonic works, cantatas, oratorios such as Canto General on the occasion of the accession of Greece to the EC, sacred music and operas such as I Metamorfosis tou Dionisou. In the time that followed, the independent left-winger Mikis Theodorakis was appointed Minister without Portfolio in the Conservative government of Mitsotakis, making an educational and cultural reform his particular task from 1990 till 1992 and promoting the reconciliation between Greece and Turkey.

After retreating from politics, he was appointed general music director of the Symphony Orchestra and Chorus of the Hellenic Radio and Television in 1993 and was also in great demand as conductor of his own works. In the years before and after 1990 Theodorakis composed the great lyric tragedies based on classical literature: Medea, Elektra, Antigone. At the beginning of 1998 he donated his entire collections to the Lilian Voudouri Foundation at the Megaron in Athens.

In 2000 Mikis Theodorakis was proposed as nominee for the Nobel Peace Prize with great support of not only the Greek population and was shortlisted by the Nobel Committee. For his artistic œuvre in the field of film music he has been awarded the Erich Wolfgang Korngold Prize at the International Film Music Biennial in Bonn in 2002. In November 2005 Theodorakis has been awarded the UNESCO prize for arts and music in Aachen/Germany.

1925
Born on the Greek island of Khíos on 29 July
1942
First piano pieces
1942
Activities against the German and Italian occupation forces; first imprisonment and torture
from 1945
Studies at the Odeion in Athens with Philoktitis Economidis with interruptions due to political unrest
1947
Involvement in the left liberation front during the civil war
1947
Imprisonment and exile on the island of Icaria
1947
Composition of a number of chamber music works
1949
Deportation to the island of Macronisos
1953
Marriage with Myrto Altinoglu
1954-1959
Studied at the Paris Conservatoire with Eugène Bigot (conducting) and Olivier Messiaen (composition)
1957
Gold Medal of the Composition Competition of the World Festival in Moscow for "Suite No. 1 for piano and orchestra"
1959
Copley Music Prize as 'est European Composer of the Year'
1959
First Prize of the International Institute of Music in London
1960
Birth of his son Giorgos
1960
Return to Greece
1963
After the assassination of the left-wing politician Grigoris Lambrakis Theodorakis founds the Lambrakis Youth and takes his seat in the Greek Parliament.
1964
Member of Parliament of Eniea Dimokratiki Aristera ('United Democratic Left')
1964
Music of the film "Zorba the Greek" with Anthony Quinn
1964
World premiere of the oratorio Axion Esti
1965
Sibelius Prize for his oeuvre
1967
Arrest, followed by various imprisonments, house arrest and exile as well as a ban on his music in Greece during the military dictatorship (1967-1974)
1970-1974
Exile in Paris
1974
Worldwide tour with his music
1974
World premiere of the oratorio "Canto General" in Paris
1974
Return to Greece after the fall of the military junta
1980
Moved back to Paris
1986
Resignation from the Communist Party
1987
World premiere of his first opera "The Metamorphoses of Dionysus" in Athens
1987
Formation of the Greek-Turkish Friendship Society
1987
First Greek composer to give concerts in Turkey
1987
European tour with Zülfü Livaneli
1988
Premiere of the ballet "Zorbas" in the Arena di Verona
1990-1992
Minister of State without portfolio
1991
World premiere of his opera "Medea" in Bilbao
1993
Retreating from national politics
1993
General Music Director of the Symphony Orchestra and Choir of the Hellenic Radio and Television
1995
World premiere of the opera "Electra" in Luxembourg
1999
World premiere of the opera "Antigone" in Athens
2000
Nomination for the Nobel Peace Prize
2002
Erich Wolfgang Korngold Prize for his artistic oeuvre in the field of film music
2002
World premiere of the opera "Lysistrata" in Athens
2005
Receives the UNESCO Prize for Arts and Music in Aachen
2008
World premiere of "Rhapsody for trumpet and orchestra" at the Cologne Philharmonic Hall
2013
Appointed honorary member of the Academy of Athens
2013
World premiere of "Rhapsody for string orchestra" in Athens