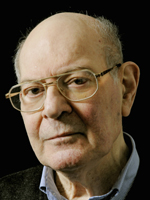 Mauricio Kagel (b. Buenos Aires, 24 December 1931; d. Cologne, September 2008) is among the most distinctive composers of contemporary music. From the very beginning his name has been associated above all with music theatre, the genre on which he has perhaps exerted the greatest impact. Besides his radical innovations in this area, however, he has also developed a highly personal aesthetic in his absolute music.
Kagel’s creative output has been enormous. It encompasses not only stage, orchestral and chamber music in an extremely wide range of instrumental settings, but also film scores, radio plays and essays. Throughout its broad spectrum, his music reveals a breach with any and all forms of academicism as well as close ties to tradition, especially to the German tradition.
Imagination, originality and humour are the hallmarks of this multimedia artist. With inexhaustible powers of invention, Kagel makes use of a very wide array of expressive devices which, although often caustic and provocative, are always placed in the service of musical discourse.
His works are honoured with several awards. For instance he has got the Erasmus Award (1998), the Ernst von Siemens Music Award 2000, the Großer Rheinischer Kunstpreis (2002) and Honorary Doctorate from Siegen University (2007).