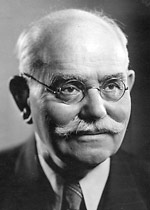 Joseph Haas was born in the Bavarian town of Maihingen near Nördlingen on 19 March 1879. The third child of the local teacher, he came into contact with domestic and church music at an early age and eventually took up a career as a primary school teacher himself. His encounter with Max Reger was crucial to his musical career. From 1904 Haas took private lessons with him in Munich and in 1907 followed him to Leipzig where he also studied with Karl Straube and Adolf Ruthardt at the local conservatoire.
In 1911 his first successes as composer and the award of the Arthur Nikisch Scholarship (for the Violin Sonata Op. 21) earned him an appointment as composition teacher at the Stuttgart Conservatoire. In 1921 he took a position at the Munich Akademie der Tonkunst where he was appointed professor in 1924, taking over the composition class and in 1925 even the direction of the Catholic church music department. In 1924 Haas, with Eduard Erdmann and Heinrich Burkhard, founded the Donaueschingen Festival for New Music, thus proving his open-mindedness about anything new, despite his always tonal compositions. In 1930 he became a member of the Preußische Akademie der Künste in Berlin. After 1945 he strove, as its president, to rebuild the Munich Hochschule für Musik.
Haas received numerous awards and honours, including honorary degrees from the University of Munich (1954) and the Papal Institute of Sacred Music in Rome (1953). He died in Munich on 30 March 1960. Taking part in many musical organisations, Haas supported not only artistic but also social and legal issues of the musicians. As teacher of a generation of composers and conductors such as Karl Amadeus Hartmann, Cesar Bresgen or Eugen Jochum and Wolfgang Sawallisch, he greatly influenced the recent musical development in Germany.

The comprehensive oeuvre of Joseph Haas comprises compositions from all compositional genres, such as for example the "folk" operas Tobias Wunderlich (1937) and Die Hochzeit des Jobs (1944) (both based on texts by Ludwig Andersen), the oratorios Die heilige Elisabeth (1931), Das Lebensbuch Gottes (1934), Das Jahr im Lied (1952), which are also accessible to amateur musicians, liturgical works, including masses in German such as the Speyerer Domfestmesse op. 80 (1930), as well as orchestral works, lieder, chamber music, piano and organ pieces. Haas' close-to-the-people style of composition gained him the reputation of being the "Spitzweg of modern piano music".