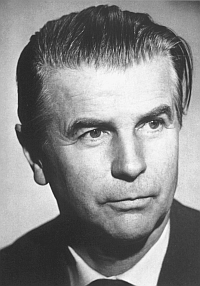 From 1946-1981 he taught music theory at the Cologne Musikhochschule and was director of Cologne’s Bach Society (1947-1962). With H. Lemacher, Schroeder has published several textbooks on harmony, counterpoint and musical form, which have gained wide currency in German-speaking countries. In 1952 he was awarded the Robert Schumann Prize of the city of Düsseldorf, in 1955 the first prize in the organ competition at Haarlem/the Netherlands, in 1956 he received the Arts Prize from the state of Rheinland-Pfalz (1956) and in 1974 he was appointed honorary doctor by the University of Bonn.

Schroeder is one of the most important German composers of the  20th century for organ. His music combines elements of the Middle Ages (fauxbourdon, ostinato technique, Gregorian modes), 20th-century polyphony and the linear, atonal writing of Hindemith. The chamber music for organ and other instruments constituted a special field of his musical activity.

More information about the composer at: www.hermann-schroeder.de