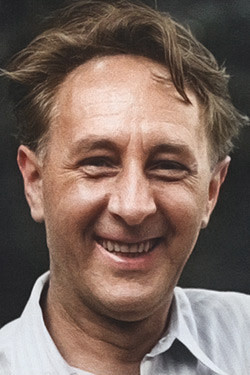 Bohuslav Martinů was born in Polička near the Bohemian-Moravian border on 8 December 1890. His musical talent was recognized and nurtured early. At the age of seven, he took his first violin lessons and only a little later started his first composition attempts.

At the age of fifteen, Martinů gave his first concert in his home town. When he entered the Prague Conservatoire in 1906, he had already written numerous chamber music works, which, unfortunately, are missing. In Prague, Martinů studied violin and organ, but was expelled from the conservatoire for ’incorrigible inattentiveness’ in 1910. In 1912 he did his violin teacher’s diploma and one year later joined the Czech Philharmonic Orchestra.

During this time he devoted much of his time to composition; by the end of World War I he had produced about 120 works of different genres. It was particularly the music of French impressionism that strongly influenced Martinů’s compositional œuvre, but Czech folk music always remained a major source of inspiration to him as well.

In 1923 Martinů went to Paris where he took composition lessons with Albert Roussel. During his two years’ studies with Roussel, Martinů developed his own individual style. Among Martinů’s first full-scale works are Half-Time for orchestra, String Quartet No. 2 and the orchestral work La Bagarre. The outstanding features of these compositions which gradually made him well-known on an international level as well, are in particular polytonal harmonies, a polyphonic style of composition and rhythmic vitality.

From the late 1920s, Martinů’s works were becoming more and more influenced by jazz music, as can be seen in compositions such as the Sextet for piano and wind instruments, Jazz Suite, the pasticcio La Revue de Cuisine, or the ballet Echec au roi. The most experimental compositions by Martinů, containing strong dissonances and avoiding tonal references, were created in 1929 (Fantaisie for two pianos, String Quartet No. 3). This phase passed quickly, however, for in the early 1930s Martinů entered a neo-classical period, which was accompanied by his rediscovery of traditional formal principles (Cello Concerto No. 1, Serenade for chamber orchestra).

When the German army occupied France in 1940, Martinů saw himself forced to emigrate to the United States. There, in 1941, he wrote his Symphony No. 1 upon commission from Koussevitzky and, until 1946, five other symphonies as well as numerous concertos and chamber music works. He lived at different places in the USA, but his heart remained in Czechoslovakia, as the composition of numerous songs based on Czech texts shows. After the war Martinů was invited to become professor at the Prague Conservatoire, but the reformation of the government, at Stalin’s behest, under a communist regime made his return impossible. It was not before 1953 that he returned to Europe. For two years he lived in Nice where he wrote two of his most important works (the oratorio Gilgamesh and the dramatic score Greek passion), then in Rome and finally in Switzerland. He died in Liestal near Basel on 28 August 1959.

1890
Born in Polička (Czechoslovakia) on 8 December
1897
Begins violin lessons
1903
First composition: string quartet "Tři jezdci" ("The Three Riders")
1906-1910
Studies violin, later organ and composition at the Prague Conservatoire
1910
Martinů is suspended from conservatoire due to “incorrigible inattentiveness”
1912
Awarded the Teaching Diploma for violin on his second attempt
1913-1923
Violinist with the Czech Philharmonic Orchestra, Prague
1914-1918
Moves back to Polička again. From 1916 teaches violin at the local music school
1919
First major success as composer: World première of his cantata “Česká Rapsódie” in Prague with the Czech Philharmonic Orchestra
1922
Studies composition with Josef Suk in Prague
1923
Moves to Paris. Studies composition with Albert Roussel
1923-1940
Works as independent composer in Paris. Influenced by Stravinsky and later by Jazz music
1924
World première of symphonic Rondo “Half-Time” in Prague. The piece marks a stylistic change in Martinů’s œuvre
1925
International attention after the world première of the string quartet no. 2 in Berlin
1927
World première of “La Bagarre” in Boston with conductor Serge Koussevitzky. Koussevitzky becomes one of the most important supporters of Martinů’s music
1928
World premières of the ballet “Vzpoura” (“The Revolt”) and his first opera “Voják a tanečnice” (“The Soldier and the Dancer”) in Brno
1931
Marries Charlotte Quennehen. Martinů is appointed member of the Czech Academy of Sciences and Arts
1932
Composition Award from the Elizabeth Sprague Coolidge Foundation Washington for the string sextet (world première 1933 in Washington)
1933
Smetana Prize for the ballet “Špalíček” (world première 1933 in Prague)
1934
Election to the Parisian Societé Triton, an association for contemporary music
1935
Composition Award from the State of Czechoslovakia for “Hry o Marii” (“The Miracle of Our Lady”)
1936
Premiere broadcast of the radio opera ‘Veselohra na mostě‘ (‘Comedy on the Bridge’)
1937
World première of “Kytice”, a radio cantata, in Prague
1938
World première of the opera “Julietta” in Prague. Martinů’s last stay in Czechoslovakia
1939
Composes ‘Polní mše‘ (‘Field Mass’) ‘for the Czechoslovakian volunteers fighting at the French front’ (world premiere in Prague in 1946)
1940
Flees Paris for the USA, leaving his manuscripts behind
1941
Arrives in New York. Highly acclaimed world première of “Concerto grosso” (Boston Symphony Orchestra, Koussevitzky). Completes 5 symphonies, concertos and 20 chamber music works during the next five years
1942
Teaches composition summer courses at the Berkshire Music Center
1946
Martinů refuses the position of Chair of Composition at Prague National Conservatoire for political reasons. The consequences of a fall affect his health (especially his hearing and nervous system)
1948
First visit to Europe following the war. Spends time in Switzerland and France on holiday. Returns to New York in autumn. Is appointed Chair of composition at Princeton University for the next three years
1950
World première of the Sinfonietta “La Jolla” in La Jolla, California and the Sinfonia concertante no. 2 in Basel (Basel Chamber Orchestra, Paul Sacher)
1951
One-act radio opera “Veselohra na mostě” (“Comedy on the Bridge”) from 1935 is chosen as the Best New Opera of the Year by the Music Critics Circle of New York City
1952
Gains American citizenship
1953
Receives a one-year scholarship from the Guggenheim Foundation. Moves to Nizza for two years
1955
Returns to the USA. World première of “Fantaisies symphoniques” in Boston; The work is awarded a prize by the Music Critics Circle in New York City.
1955
Martinů is appointed member of the National Institute of Arts and Letters
1955
Holds a chair at Curtis Institute Philadelphia and Mannes School of Music New York
1956
May: Leaves USA for the last time
1956
Composer in Residence at the American Academy in Rome from October
1958
World première of the oratorio “The Epic of Gilgamesh” in Basel with conductor Paul Sacher
1958
Accepts Sacher’s invitation to live in his farm house in Schönenberg (Switzerland)
1959
Martinů dies in Liestal near Basel on 28 August