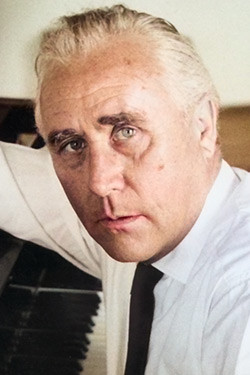 Werner Egk was born in Auchsesheim (now district of Donauwörth), Bavaria, as Werner Mayer on 17 May 1901. In 1921 he studied theory, composition and conducting with Carl Orff in Munich. In the same year Egk worked at a theatre in Schwabing as stage manager, scene painter and director of incidental music. In 1922 he started studying philosophy and musicology (with Adolf Sandberger) at the Munich university. Since his marriage with the violinist Elisabeth Karl in 1923 he called himself Werner Egk. After one year in Italy (1926/27) he returned to Munich and worked as musical director of an orchestra at a cinema. One year later he moved to Berlin, where he came into close contact with a.o. Kurt Weill, Erich Mühsam, Jürgen Fehling, Bertolt Brecht and Erwin Piscator, but returned to Munich in the same year. At this time he started working for the radio, creating several works for the new medium.


The world premiere of his opera Die Zaubergeige [The Magic Violin] (Frankfurt 1935), being one of the most popular operas in Germany for the following years, marked the beginning of his international career as an opera composer. In 1936 he became conductor at the Berlin State Opera, and in 1941 he was appointed chairman of the Composers Board at the Reichsmusikkammer. After the world war Egk continued his courageous defence of the rights of composers, working in key positions at the GEMA and with international collection societies, such as a chairman of the Composers Board at the GEMA (since 1950), as president of the German Composers Association (since 1954) and as president of the German Music Council (since 1968).

The first scenic performance of Abraxas in Munich in 1948 attracted special attention, as the ballet was banned by the Bavarian Minister of Cultural Affairs, Alois Hundhammer, after five performances. From 1950-53 Egk worked as professor of composition and director at the Musikhochschule in West Berlin. In 1954 Staatsintendant Rudolf Hartmann commissioned him to rehearse and direct all performances of his operas and ballets at the Bavarian State Opera. This contract terminated after 20 years during the period of office of Hartmann's successor Staatsintendant Günther Rennert. For his musical oeuvre, which covers almost every musical genre, Egk has been awarded a.o. the Honorary Arts Award of the city of Munich (1972), the star of the Grand Cross for Distinguished Service of the Federal Republic of Germany (1970), the Gold Medal for Science and Art of the city of Munich (1966), the Order of Merit of Bavaria (1962) and the Berlin Arts Award (1950) and the Olympic Gold Medal (1936). 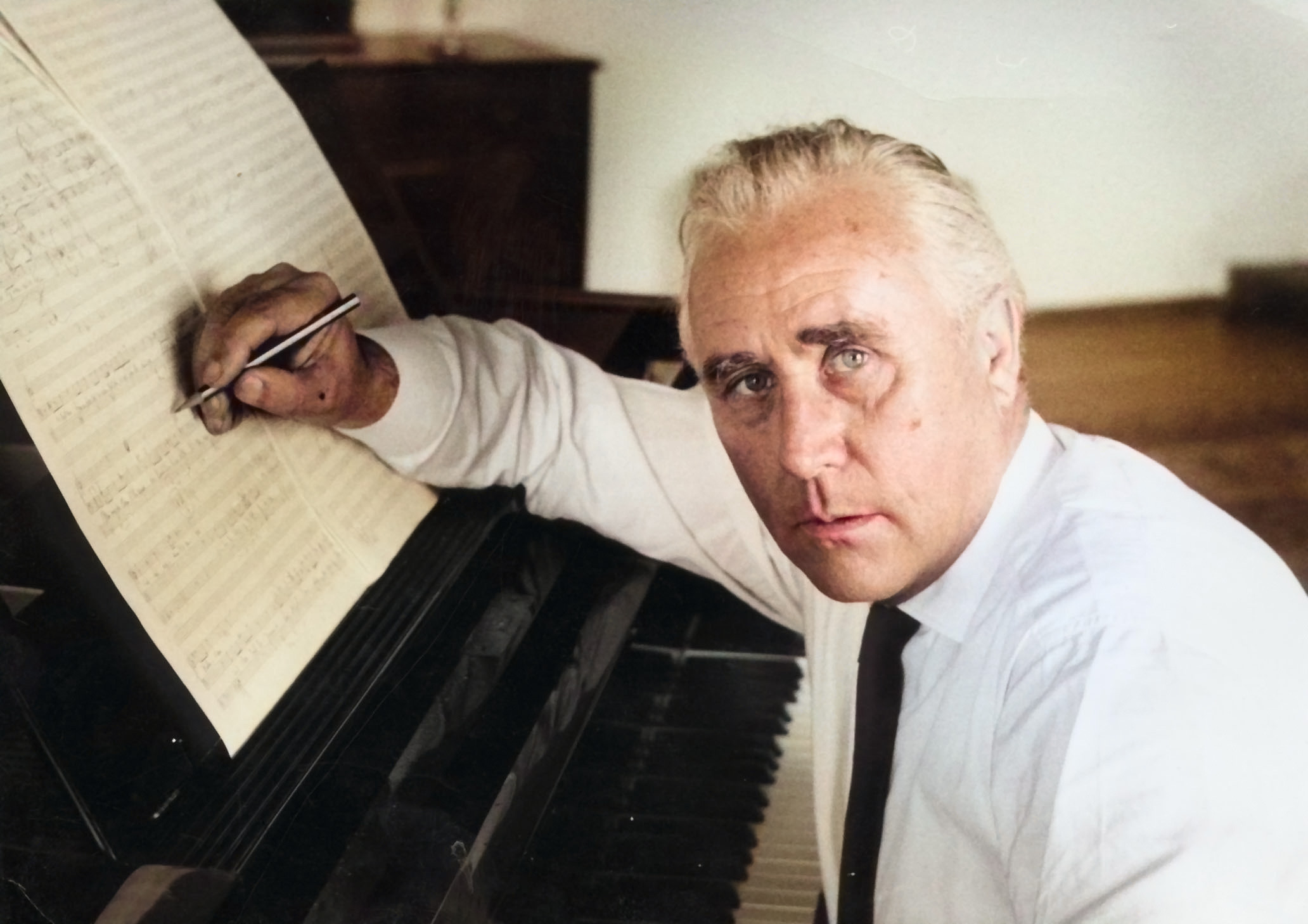 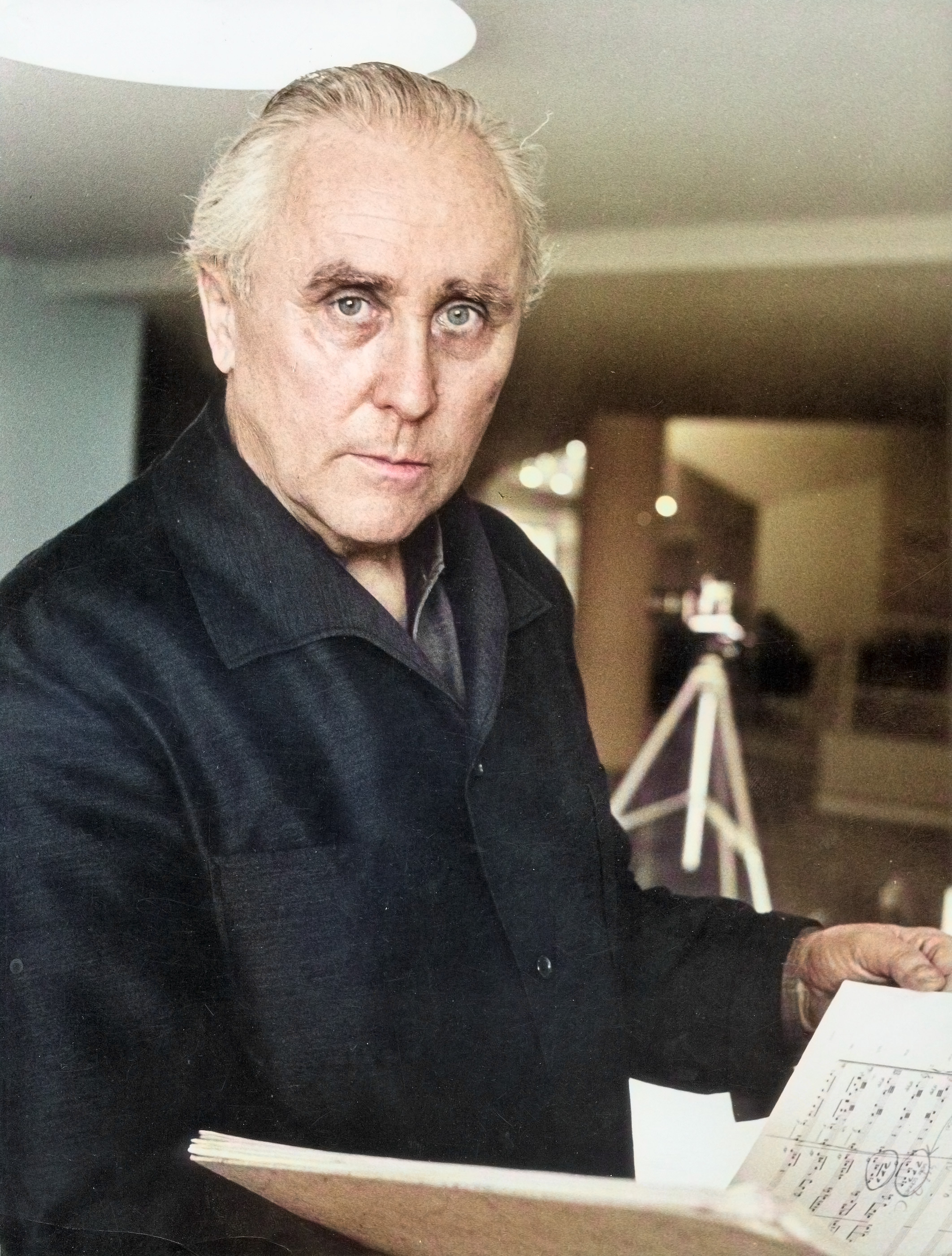 Born in Auchsesheim (Bavaria) on 17 May as third child of the teacher Joseph Mayer and his wife Marie, née Buck

1908
Family moved to Augsburg
1911
Admitted into the Augsburg Gymnasium of St. Stephan
1912
First piano lessons with the daughter of a choir director
1919
Attended the Städtisches Konservatorium für Musik
1920
Passed final exams at St. Stephans and left his parents´home to move to Erbach (Odenwald)

End of the year: Worked as private tutor of the sons of Kammersänger Heinrich Knote in Pöcking at the Starnbergersee

Worked at the theatre Schaubühne in the Steinicke-Saal in Schwabing as stage manager, scene painter and director of incidental music
1922
Death of his mother; returned to Augsburg

Matriculated as student of philosophy at the University of Munich

Worked as musical director of an orchestra at the cinema "Phöbus-Palast"
1928
Moved to Berlin, looking for commissions, while his family stayed in Munich

Wrote music for the "Funkstunde" Berlin commissioned by the director Hans Flesch, later also for the Bavarian Radio, then "Deutsche Stunde in Bayern"

Was awarded an honorary gift of the Münchner Volksbühne

1932
Was commissioned by the Munich Radio to write an opera for the radio; discussed the "Columbus" plan in detail with Hermann Scherchen

9 March: Was appointed musical director at the Preußische Staatsoper Berlin

Made the acquaintance of Heinrich Strobel with whom he had close ties until Strobel´s death in 1970
Gold Medal for the composition "Olympische Festmusik" at the Olympic Games in Berlin
1937
14-19 June: Took part in the Paris congress of the "Confédération Internationale des Sociétés d' Auteurs et Compositeurs" (CISAC)

1938
24 November: World première of the opera "Peer Gynt" at the Preußische Staatsoper; after the première Egk was exposed to political attacks in the party papers and to a démarche to Adolf Hitler directed against Egk
1939
Another performance of "Peer Gynt" at the Music Festival Days of the Reich at Düsseldof through the services of Tietjen

19 May: Conferment of one of the three usual music awards at the Music Festival Days by Goebbels
1940
Termination of the contract with the Preußische Staatsoper

World première of "Joan von Zarissa" at the Berlin Staatsoper on 20 January
1941
10 April: Conclusion of five-year contract with the city of Frankfurt on the Main

20. December: Joined the Berlin Staatsoper again as guest conductor
1942
13 January: First scenic performance of "Columbus" in Frankfurt on the Main

from May: Prepared the performance of "Joan von Zarissa" at the Grand Opéra in Paris

11 December: Son Titus was called up for military service

22 December: Son Titus was sent to the front
1945
7 January: Last sign of life from son Titus from the east; has been missing since
1946
Meet Heinrich Strobel again at the Südwestfunk in Baden-Baden

Seccessful endeavours to unite the German composers in a union and to reestablish the German copyright society
1947
Met Heinz Tietjen, Boris Blacher and Hans Heinz Stuckenschmidt in Berlin

Became president of the advisory board of the GEMA and head of the German Composers´Union
1951
29 August: Signed three-year contract with the Bayerische Staatsoper

20/21 October: Met Igor Stravinksy in Munich
1952
29 October: Egk gave notice for 30 March 1953 as director of the Hochschule für Musik
1953
6 May: World première of "Die chinesische Nachtigall" at the Deutsches Museum in Munich

15 May: Handed his post over to Boris Blacher at the Berlin Hochschule für Musik
1954
31 May: Was elected president of the German Composers Union

26 October: Staatsintendant Rudolf Hartmann commissioned the composer to rehearse and direct all performances of his operas and ballets at the Bayerische Staatsoper. This contract was renewed every year and terminated after 20 years during the period of office of Hartmann´s successor Staatsintendant Günther Rennert
1955
25 May: Bought a piece of land in Inning (Ammersee)

December: Completion of the house in Inning
1958
Guest performances as conductor in East Berlin, Vienna, Stuttgart, Augsburg and Paris
1959
January: Great Cross for Distinguished Service of the Order of Merit of the Federal Republic of Germany

September: Trip to Leningrad and Moscow at the invitation of the Soviet government
1961
23 May: Received the Gold Medal of the city of Munich

2 June: World première of "17 Tage und 4 Minuten" at the Württembergisches Staatstheater in Stuttgart

8-16 September: Visit to Bucharest at the invitation of the Festival Georges Enescu
1968
Summer: Worried about his seriously ill wife

18/19 October: Was elected president of the German Music Council
1969
28 November: World première of "Casanova in London" at the Munich Nationaltheater

Startet working on the new version of the opera "Irische Legende"
1970
7 September: Received the star of the Great Cross for Distinguished Service of the Federal Republic of Germany
1971
13 December: A bust of Werner Egk was put up in the foyer of the Augsburg Stadttheater

Resigned from his office as president of the German Music Council
1972
13 June: Received the honorary arts award of he city of Munich

31 August: End of the contractual commitment to the Bayerische Staatsoper

Beginning of October: Moved to Aarau (Switzerland)
1973
Donation of a Werner Egk Prize by the city of Donauwörth which has been awarded every two years since then (for the first time in 1974 to Professor Eugen Jochum)
1974

Beginning of September: Returned to Inning

1975
26 February: First scenic performance of the new version of "Irische Legende" in Augsburg
1976
Elected president of the CISAC (International Confederation of Societies of Authors and Composers) in Paris for two years
1978
12 December: Death of Mrs Elisabeth Egk; burried in Donauwörth
1980
The city of Donauwörth decided to set up a Werner Egk Community Centre
1981
18 May: Chamber music matinée of the Bavarian State Orchestra at the Cuvilliéstheater in honour of Egk´s 80th birtday

22 May: Ceremony in Donauwörth

24 May: Ceremony in Augsburg
1982
Opening of the Werner Egk Community Centre in Donauwörth in the presence of the composer; in 1993 the community centre moved into a new domicile on "Museum Island" where it has been open to visitors in a new desing since then
1983
Werner Egk died in Inning on 10 July; at his own wish, he was burried in the municipal cemetery of Donauwörth