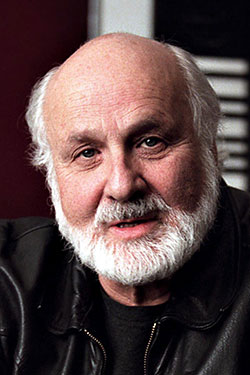 Release is an intensely affecting piece. A valedictory character, the electronic sounds that take wing through the auditorium are like the spirit…. an end as beautiful as anything in the recent chamber music literature.
– Mark Swed, The Los Angeles Times
Morton Subotnick is a living legend in the development of electronic music. A leading innovator in works involving instruments and other media, his oeuvre utilizes many of the important technological breakthroughs in the history of the genre.
His groundbreaking work Silver Apples of the Moon, commissioned by Nonesuch Records in 1967, was the first original large-scale composition to be composed specifically for the disc medium; a conscious acknowledgment that the home stereo system constituted a present-day form of chamber music. Written using the Buchla modular synthesizer (an electronic instrument built by Donald Buchla utilizing suggestions from Subotnick and Ramon Sender), this work contains synthesized tone colors, striking for its day, and a control over pitch that many other contemporary electronic composers had relinquished. There is a rich counterpoint of gestures, in marked contrast to the simple surfaces of much contemporary electronic music. The next eight years saw the production of several more important compositions for LP realized on the Buchla synthesizer: The Wild Bull, Touch, Sidewinder and Four Butterflies. All of these pieces are marked by sophisticated timbres, contrapuntal rich textures, and sections of continuous pulse, suggesting dance.
Subotnick played an important role in developing the “ghost” box: an electronic device consisting of a pitch and envelope follower for a live signal with an amplifier, frequency shifter and ring modulator. Subotnick’s notable works for ghost and live instruments include Liquid Strata for piano, The Wild Beasts for trombone and piano, Axolotl for solo cello, and A Fluttering of Wings for string quartet. The subtlety, sophistication and control over real-time electronic processing that Subotnick demonstrated in these innovative works secured his reputation as one of the world’s most important electronic music composers. Morton Subotnick was named a Pulitzer Prize finalist in 1980 for his work, After the Butterfly.
In addition to music in the electronic medium, Subotnick has written for symphony orchestra, chamber ensembles, theater and multimedia productions. His “staged tone poem” The Double Life of Amphibians, a collaboration with director Lee Breuer and visual artist Irving Petlin, utilizes live interaction between singers, instrumentalists and computer and was premiered at the 1984 Olympics Arts Festival in Los Angeles.
The concert version of Jacob's Room, a monodrama commissioned by Betty Freeman for the Kronos Quartet and singer Joan La Barbara, received its premiere in San Francisco in 1985. This version of Jacob's Room was then staged by Herbert Blau with video imagery by Steina and Woody Vasulka, in Philadelphia in April, 1993 under the auspices of The American Music Theater Festival. Subotnick completed transforming this work into a complete one-act chamber opera in 2010 thanks to the commission by the Bregenz Festival’s Kunst aus der Zeit in cooperation with soniq performing arts in Berlin. The complete Jacob’s Room, directed by Mirella Weingarten with live video imagery by Lillevan, had its world premiere at the Bregenz Festival in August, 2010. The opera’s German premiere in Berlin followed in October, 2010.
The Key to Songs, for chamber orchestra and computer, was premiered at the 1985 Aspen Music Festival. Return, commissioned to celebrate the return of Haley's Comet, premiered with an accompanying sky show in the planetarium of Griffith Observatory in Los Angeles in 1986. Subotnick's recent works — among them Jacob's Room, The Key to Songs, Hungers, In Two Worlds, And the Butterflies Begin to Sing and A Desert Flowers — utilize computerized sound generation, specially designed software Interactor and "intelligent" computer controls which allow the performers to interact with the computer technology.
All My Hummingbirds Have Alibis (1994) was an interactive concert work and a CDROM (perhaps the first of its kind), Making Music (1995), Making More Music (1998) were his first works for children, and an interactive 'Media Poem', Intimate Immensity, premiered at the Lincoln Center Festival in NY (1997). The European premiere (1998) was in Karlsrhue, Germany. A string quartet with CDROM, Echoes from the Silent Call of Girona (1998), was premiered in Los Angeles by Southwest Chamber Music.
Subotnick is also doing pioneering work to offer musical creative tools to young children. He has authored a series of six CDROMS for children, a children's website [creatingmusic.com] and developing a program for classroom and after school programs. Subotnick has also developed "Pitch Painter", a musical finger painting app that engages children in creative musical play and introduces them to a variety of musical instrumental sounds and authentic scale tunings from four regions of the world.
In 2015 and 2016, WERGO Records re-released two collections of landmark recordings: The Wild Beasts featuring After the Butterfly and The Wild Beasts, and Music for The Double Life of Amphibians, including works from Subotnick's staged tone-poem The Double Life of Amphibians. Subotnick continues to tour extensively throughout the U.S. and Europe as a lecturer and composer/performer. Morton Subotnick is published by Schott Music Corporation.