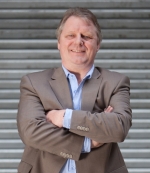 Mike Schoenmehl, born in 1957, studied music education at the Johannes Gutenberg University in Mainz from 1974 to 1980 and completed his studies as 'certified private music teacher for piano'.
Since 1977 he has given music lessons in piano, theory, classical and jazz music, was editor of popular music at the Schott publishing house in Mainz from 1984 to 1990, and has been lecturer at the Frankfurter Musikwerkstatt (FMW) since 1986.
Since 1995 he has been a part-time lecturer at the Frankfurt Hochschule für Musik und Darstellende Kunst and since 1996 has had a part-time lectureship for jazz piano at the Johannes Gutenberg University in Mainz.
In addition, Schoenmehl served as a juror at big band competitions at regional and national levels and as head of numerous big band workshops.
Of course, he also does his fair share of music-making: since 1976 Mike Schoenmehl has been active as a pianist with the Woog City Stompers and since 1978 he has led his own quartet which focusses on bebop, Latin and funk and has already accompanied the vocalists Betty Dorsey and Rachel Gould.
As a composer and author of numerous publications, he has been particularly active in the field of education.
Among his works published by Schott Music are: For further works, see the product catalogue on this web site.