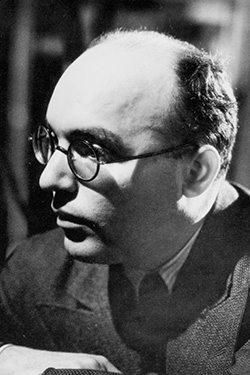 Kurt Weill was born in Dessau on 2 March 1900.  Having displayed musical talent early on, he became a substitute accompanist at the Dessau Court Theater during the First World War, and - after studying theory and composition with Albert Bing - enrolled at the Berlin Hochschule für Musik.  Not liking the training with Engelbert Humperdinck, though, he was accepted finally into Ferruccio Busoni’s master class in composition.  In order to support himself, he conducted synagogue choirs, tutored students (e.g. Claudio Arrau, Maurice Abravanel) in music theory and contributed articles and reviews to "Der deutsche Rundfunk“.

By 1925, Weill had been established as one of the leading composers of his generation, along with Paul Hindemith and Ernst Krenek. In the same time, he turned to writing operas, collaborating a.o. with Georg Kaiser (e.g. Der Protagonist, Weill’s sensational theatrical debut in 1926, or Der Silbersee, 1933) and with Bertolt Brecht (e.g. Aufstieg und Fall der Stadt Mahagonny or the ballet The Seven Deadly Sins for Balanchine’s troupe). The Brecht-Weill piece Die Dreigroschenoper with its sometimes aggressive, sometimes sentimental popular song-style with elements of jazz, moritat and carabet songs remains one of his most famous works.

Weill’s compositions of the early thirties outraging the Nazis and campaigns discouraging productions of his work, Weill fled Germany in 1933 via Paris and London to America (in 1935) to oversee Max Reinhardt’s production of his opera Der Weg der Verheißung after Franz Werfel’s biblical spectacle. Weill and his wife Lotte Lenya stayed in the USA and applied for American citizenship.

Working mainly for Broadway, Weill established himself soon as a new and original voice in the American musical theater, often chosing unusual collaborators such as Paul Green, Maxwell Anderson, Ogden Nash, and Langston Hughes.  He also completed two film scores, including Fritz Lang’s You and Me.

In 1946 Weill was elected as the only composer-member of the distinguished Playwrights Producing Company (founded in 1938) which brought his musical version of Elmer Rice’s Pulitzer-Prize winning drama Street Scene to Broadway as an American opera, the first real successor to "Porgy and Bess“. Weill’s experiment Lady in the Dark was a big success and his daring last two works for Broadway, the concept musical Love Life and the musical tragedy Lost in the Stars, challenged the Broadway institution and audience to a degree that would not be met until the 1970s in the Sondheim-Prince collaborations.