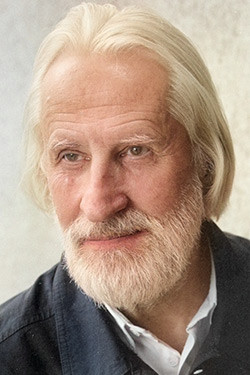 Klaus Huber was born in Berne on 30 November 1924. After finishing grammar school in Basle and teacher training in Kusnacht/Zurich, he went to the Zurich Conservatoire (1947-49) to study violin with Stefi Geyer and music education. During this time he also studied theory and composition with Willy Burkhard (1947-55). He continued his studies with Boris Blacher in Berlin in 1955/56, but it wasn’t until 1959 that his international breakthrough came at the IGNM World Music Festival in Rome with the chamber cantata Des Engels Anredung an die Seele.

From 1964-73 Huber taught composition at the Music Academy of Basle. On three occasions (1966, 1968 and 1972) he conducted seminars on composition at the Gaudeamus Foundation in Bilthoven and in 1969 he founded the International Composers' Seminar in Boswil (Switzerland). From 1973 until his retirement in 1991 Huber was chair of composition at the Musikhochschule in Freiburg/Breisgau and director of the Institute of New Music. In addition, he held international visiting professorships, composition classes and residences at renowned institutions.

In 1970 Huber was awarded the Beethoven Prize from the City of Bonn for his orchestral work Tenebrae (1966/67). In 1975 he also received the Composition Award of the Swiss Composers Association, of which he then became President from 1979-82. His other awards include the Arts Prize of the City of Basle (1978), the Premio Italia (1986), the Culture and Peace Award of the Villa Ichon, Bremen (2002) and the Ernst von Siemens Musikpreis (2009).

Both in the orchestral work Tenebrae (1966/67), which makes the natural phenomenon of a solar eclipse appear as a darkening and brightening of orchestral colours, and in the violin concerto Tempora (1970), Huber experimented with the use of quarter-tones and quarter-tone polyphony.

Huber is a socially and politically conscious composer and his music often conveys a humanistic message. Many of his early works were inspired by music from the Christian litany, and in the apocalyptic oratorio …Inwendig…voller Figur (1971) he began openly to express his beliefs. His works often call for an end to human misery, injustice, lack of freedom, intolerance and violence, as in ...Ausgespannt... (1972),  ...Ohne Grenze und Rand... for viola and small orchestra (1977) and Erinnere dich an G... for double-bass and 18 instrumentalists (1977). In Turnus for conductor, stage manager, symphony orchestra and tape (1974), Huber addresses the phenomenon of a large-scale orchestra and the social function of the conductor.