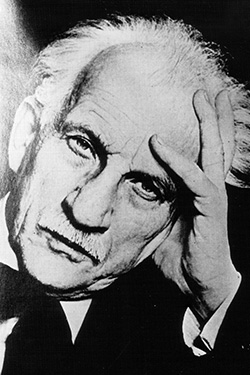 Hans Erich Pfitzner was born in Moscow on 5 May 1869. His father, Robert Pfitzner, had an engagement as a violinist at the Moscow opera house. In 1872 the family moved to Frankfurt/Main, where Pfitzner’s father took up the post of principal violinist at the municipal theatre. From 1886 to 1890, Hans Pfitzner studied at the Dr. Hoch’s Conservatory in Frankfurt with James Kwast (piano) and Iwan Knorr (composition).


After his first employment as a piano and theory teacher at the conservatory in Koblenz (1892 to 1893), Pfitzner took up the unpaid post of conductor at the municipal theatre in Mainz and managed to premiere his first opera, Der arme Heinrich, there in the following year. Aside from his job in Mainz, he continued his education with Hugo Riemann in Wiesbaden. In 1897 Pfitzner moved to Berlin, where he taught composition and conducting at the Stern Conservatory. In addition, he worked as principal conductor at the Theater des Westens from 1903 to 1905. In 1907 he directed the concerts of the newly founded Kaim Orchestra in Munich.


In the same year, Pfitzner received an appointment as director of the municipal orchestra and of the conservatory in Strasbourg. The Strasbourg years (1908 to 1918) marked the height of his creativity and work as a composer, conductor, teacher, director and writer. In addition, he worked as director of the Strasbourg Opera from 1910 to 1916. Between 1909 and 1915, he composed his major musico-dramatic work in Alsace: the "musical legend" Palestrina, the libretto of which he wrote himself.


The first performance under Bruno Walter in Munich (1917) sparked great enthusiasm. In 1918, famous artists, including Thomas Mann, supported the foundation of the "Hans-Pfitzner Verein für deutsche Tonkunst" (Hans Pfitzner Association of German Art of Music), whose aim was to conserve traditional styles. At the end of the war, Pfitzner had to return to Germany and, in 1920, taught a master class in composition at the Preußische Akademie der Künste (Prussion Academy of the Arts) in Berlin. After that he did not have a permanent job and travelled a lot as a conductor, opera producer and pianist. He died in Salzburg on 22 May 1949 and received a tomb of honour on the main cemetery in Vienna.


Pfitzner’s oeuvre covers all musical genres. Although the main emphasis of his work lies on the music drama (he composed five works for the musical theatre: Der arme Heinrich, Die Rose vom Liebesgarten, Das Christelflein, Palestrina and Das Herz), Pfitzner, who regarded himself as someone continuing the classical-romantic tradition, also created songs and choral works, chamber music and compositions for orchestra of great persuasive power.