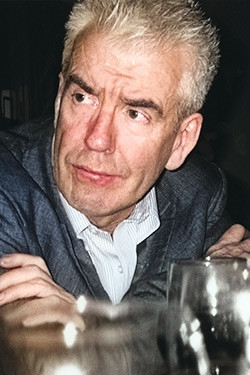 The world now has something rare: a new genuinely comic opera and maybe the most inventive Oscar Wilde opera since Richard Strauss' Salome more than a century ago. – The Los Angeles Times on The Importance of Being Earnest

Gerald Barry was born in Clarehill, Clarecastle, County Clare, Ireland, in 1952, and studied with Stockhausen and Kagel. His early music from 1979 included "_______" for ensemble, of which Kagel wrote: 'Gerald Barry is always sober, but might as well always be drunk. His piece "_______" is, on the contrary, not rectilineal, but '

'. Also from 1979 is Ø for two pianos in which both pianos play identical music simultaneously.

Barry’s substantial catalogue includes a number of works for orchestra. Chevaux-de-frise for the 1988 BBC Proms, The Conquest of Ireland (1996), Day (2005/14), The Eternal Recurrence (2000), a setting of Nietzsche for voice and orchestra, and Hard D (1995) for the Orkest de Volharding, were all commissioned by the BBC. No other people, was presented at the 2013 Proms with the BBC Scottish Symphony Orchestra and Ilan Volkov. Canada (2017), a short work for voice and orchestra, was premiered by the City of Birmingham Symphony Orchestra and tenor Allan Clayton under Mira Gražinytė-Tyla at the 2017 BBC Proms. Canada received its US premiere at the 2019 Tanglewood Music Festival. Humiliated and Insulted (2016) for chorus and orchestra was co-commissioned by Raidió Teilifís Éireann and theRoyal Scottish National Orchestra.

Amongst his orchestral works is a growing body of concertos. Barry’s Piano Concerto (2012), written for Nicolas Hodges and co-commissioned by Musica Viva and City of Birmingham Symphony Orchestra, was premiered in Munich in2013 with subsequent performances by the CBSO, Avanti! Chamber Orchestra, Britten Sinfonia, RTÉ National SymphonyOrchestra and at the Cabrillo Festival of Contemporary Music conducted by Cristian Măcelaru. Commissioned by the CBSO, London’s Southbank Centre and RTÉ, his Organ Concerto (2018) received its world premiere in March 2018 with the CBSO, followed by performances by the London Philharmonic Orchestra and the RTÉ NSO. The Organ Concerto received its German premiere in Cologne during autumn 2019 with the Deutsche Kammerphilharmonie Bremen conducted by Duncan Ward. Lawrence Power commissioned a Viola Concerto (2018-19), which he premiered in May 2019 with Britten Sinfonia and Thomas Adès. A fourth concerto, for cello, will be premiered by soloist Tatjana Vassiljevaand the RTÉ Concert Orchestra as part of Cellissimo 2020.

Several ensemble works have been written for Birmingham Contemporary Music Group (BCMG), including Wiener Blut (2000), Dead March (2007), and Beethoven (2008). London's Southbank Centre commissioned God Save The Queen (2001)for choir and chamber ensemble for the London Sinfonietta as part of the Royal Festival Hall’s 50th birthday celebrations. Le Vieux Sourd (2008) for piano was written for Betty Freeman, Feldman’s Six-Penny Editions (2008/9)was commissioned by London Sinfonietta and Saint Paul Chamber Orchestra, and No people. (2013) was written for ensemble 7Bridges.

Barry is well known for his contribution to the opera repertoire. His first opera The Intelligence Park (1981–88),released as a recording on NMC in 2002, was commissioned by the ICA and first performed at the 1990 AlmeidaFestival. A new production by Music Theatre Wales opened at Covent Garden in September 2019, followed by performances around the UK throughout the autumn. A second opera, The Triumph of Beauty and Deceit (1991), written for Channel 4 Television, opened the 2002 Aldeburgh Festival, followed by performances in London and the BerlinerFestwochen conducted by Thomas Adés. A new staging took place in 2013 at the Badisches Staatstheater Karlsruhe. The Bitter Tears of Petra von Kant (2001–4) was premiered in 2005 in Dublin with subsequent performances at English National Opera that year and at Theater Basel in 2008. The RTÉ NSO recording has been re-released on the discovery label. La Plus Forte (2007), a one-act opera, was commissioned by Radio France for the 2007 FestivalPrésences. It was premiered by Barbara Hannigan in Paris, and toured to Amsterdam, London, Dublin, Miami, Toronto and Porvoo, Finland. In 2019, Barry created an English version of the work, which was performed by the RoyalConcertgebouw Orchestra and Thomas Adès.

Barry’s fifth opera, The Importance of Being Earnest (2009–10), was jointly commissioned by the LA Philharmonic and the Barbican in London and received its world premiere staging at Opéra national de Lorraine – Nancy in 2013.The opera has received a number of new productions notably including at the Royal Opera House, Covent Garden in2013 (since revived in London and given a US premiere at Lincoln Center with the New York Philharmonic and IlanVolkov) and by Northern Ireland Opera. Earnest received a 2013 RPS Award for Large-Scale Composition and the recording, released on NMC, was nominated for a 2016 Grammy Award. A new production by the Nouvel Opéra Fribourgopened in Fribourg and Paris in May 2019.

Most recent among his operas is Alice’s Adventures Under Ground (2014-15), premiered in concert in November 2016with Thomas Adès conducting the LA Phil New Music Group and Barbara Hannigan in the title role. Adès conducted the same cast in the European premiere, with Britten Sinfonia at London’s Barbican Centre. The world premiere staging was given at Covent Garden in February 2020 in a production by Antony McDonald that received rave reviews.

German Government Scholarship (DAAD) to study with Stockhausen at the Hochschule fur Musik, Cologne
1976
Begins studies with Kagel in Cologne
1977
Austrian Government Scholarship to study in Vienna with Friedrich Cerha but they rarely meet. Cerha helps him with technical aspects of his first recognised piece, Things That Gain By Being Painted for Soprano, Speaker, Cello and Piano.

'Kitty lie over across from the wall' for piano and orchestra.
1977-78
Moves between Vienna and Cologne.
1978-81
Lives in Cologne writing, working as a church organist and studying with Kagel
1979
'Ø’ for two pianos and ‘___________’ for ensemble
1980
The Sleeping Beauty, Cinderella, Snow White - Theater am Marienplatz, Krefeld
1981
Orchestral music and songs for 'Unkautgarten', Reinhild Hoffmann’s ballet for Tanz Theater Bremen

String Quartet No. 1
1986
From The Intelligence Park for orchestra
1988
Chevaux-de-frise for orchestra (BBC Proms)
1989
Bob for chamber ensemble
1990
Premiere of The Intelligence Park at the Almeida Festival, London.
1991-92
The Triumph of Beauty and Deceit chamber opera in two acts for Channel 4 Television
1992
Hard D for ensemble for De Volharding

Wiener Blut for ensemble at the BBC Proms

God Save the Queen for children’s choir and ensemble, written to mark the Southbank Centre’s 50th Birthday

Featured Composer at the Aldeburgh and Huddersfield Festivals

No other people for orchestra
2009
Joins Schott Music

Schott and Sons, Mainz for bass voice and choir

Feldman's Sixpenny Editions for ensemble
2010
UK, Canadian and Dutch premieres of La Plus Forte'(London and Toronto Symphony Orchestras and the Netherlands Philharmonic)

CD of hitherto unreleased recordings (Things That Gain By Being Painted, Kitty lie over across from the wall, L’Agitation des Observateurs, Les Tremblement des Voyeurs, Chevaux de frise) appears in the journal Boulevard Magenta 2 (The Irish Museum of Modern Art), also containing sketches from The Bitter Tears of Petra von Kant.
2011
World premiere of The Importance of Being Earnest, Walt Disney Concert Hall, Los Angeles
2012
Concert performance of The Importance of Being Earnest in London, Barbican Hall (national premiere, UK)
2013

Canada for voice and orchestra premiered at the BBC Proms with the City of Birmingham Symphony Orchestra, Mirga Gražinytė-Tyla and tenor Allan Clayton