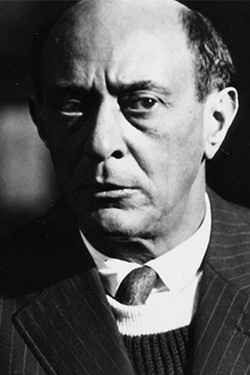 Arnold Schoenberg was born in Vienna on 13 September 1874 as son of the Jewish merchant Samuel Schoenberg and his wife Pauline. As early as 1882 he took his first violin lessons and made his first attempts at composing. After finishing school in 1890, he started to train as a clerk in a bank and worked for the private bank Werner & Co in Vienna until 1895. In 1894, being a member of the amateur orchestra ’Polyhymnia’, he met his future teacher and brother-in-law Alexander Zemlinsky. In the following years Schoenberg devoted himself mainly to composing and directing workers’ choirs. In 1901, upon recommendation of Richard Strauss, he got a job as musical director at the Berlin cabaret ’Überbrettl’ and in 1902 taught composition at the Stern Conservatoire. In 1903 he returned to Vienna where he set up as a composer and teacher of composition.

Among the pupils he taught at the progressive ’Schwarzwald-Schule’ in Vienna, were Alban Berg and Anton Webern among others. In his ’Harmonielehre’ of 1911 Schoenberg digested his experience of teaching.
Apart from working as a composer, he also turned to painting from 1907. He contributed to the almanac ’Der blaue Reiter’ published by Wassily Kandinsky and Franz Marc. He was also successful in the field of music with performances of his melodrama cycle Pierrot lunaire Op. 21 (1912) and the world première of Gurrelieder (1913) in Vienna.

After scandal concerts with atonal works and futile attempts to get a university job, Schoenberg began to work again as teacher at the Stern Conservatoire in 1913. From 1915 to 1918 he was called up for military service. After World War I Schoenberg founded the Society for Private Musical Performances (1918-1921) the object of which was, above all, to give public rehearsals and performances of contemporary progressive music. In 1923 he publicly announced his twelve-note serial method of composition.
From 1925 Schoenberg took charge of the master class in composition at the Prussian Academy of Arts in Berlin, in succession to Ferruccio Busoni. During that time he was appointed honorary member of the Academia Santa Cecilia in Rome. In 1932 he finished the opera Moses and Aron.

In 1933, the year the National Socialists took over power, Schoenberg had to give up his post at the Berlin Academy. That year he emigrated to the USA via Paris and found a job as music teacher at the Malkin Conservatoire in Boston. From 1936 to 1944 he held a professorship in music in the University of California at Los Angeles. In 1941 he was granted American citizenship. In 1947 he was elected member of the American Academy of Arts and Letters, in 1949 the city of Vienna conferred the freedom of the city on him. Schoenberg died in Los Angeles on 13 July 1951.

Unlike any other composer of his time, Schoenberg initiated a radical change towards New Music. Nevertheless he always saw his works of the Second Viennese School as logical continuation of Western, particularly Austrian music tradition. As teacher of composition he shaped several generations of important musicians and composers. Since the 1950s the twelve-note technique developed by him has become the basis of serial composition techniques.

Please visit the website of the Arnold Schoenberg Center www.schoenberg.at